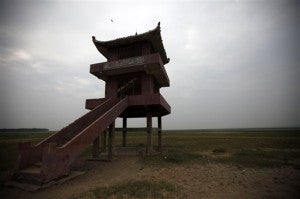 A bird-observing platform stands in the dried-up Poyang Lake, a vast wetland turned dry by China's worst drought in decades, in Yongxiu in Jiangxi Province, China. As Poyang shrinks to a tenth its usual size, crops wither and millions of people go thirsty. Critics point to the gargantuan Three Gorges Dam as a cause (AP Photo).

SHANGHAI — The operator of China’s gargantuan Three Gorges Dam is defending it from deepening criticism over its environmental and economic impact.

In a social responsibility report released over the weekend, China Three Gorges Corp. says the dam has proven its worth by helping to control flooding and boosting the country’s supply of clean energy. It also claims it has helped with poverty alleviation, earthquake relief and other social priorities.

The report was released just a month after China’s Cabinet outlined a slew of urgent environmental, geologic and economic problems related to the $23 billion showcase project on the Yangtze River.

“We are fulfilling a sacred mission in playing a pivotal role in flood control, power generation, transportation and the environment,” said the report posted on the company’s website.

Touted as the best way to end centuries of flooding along the Yangtze and provide power for China’s industrial boom, the dam has been controversial since it was first conceived decades ago. The Cabinet report cited a heightened risk of landslides, earthquakes and prolonged damage to the river’s ecology as key problems requiring attention.

This spring, a prolonged drought added to pressure on the Yangtze, especially downstream from the dam, as a source of water for industry, homes, farming, energy and shipping. The dam’s operator released water to the point where it warned it could release little more without affecting upstream shipping.

Seasonal summer rains, which began early this month, alleviated the problem in some areas, but triggered massive flooding that has displaced more than 5 million people.

The dam’s backers contend that without the facility, both flooding and drought conditions would be worse still. But the severity of recent problems has fueled speculation that the dam may be affecting overall weather patterns, or accentuating trends associated with global warming.

It also provided 84.37 billion kilowatt-hours of clean electricity last year, the equivalent of burning 28.94 million tons of coal that would have produced 70.66 million tons of carbon dioxide.

China has been avidly increasing use of hydroelectric power as part of its strategy to increase the share of clean energy it uses and help reduce its reliance on costly imported crude oil.

But the frenzy of dam building has left few waterways intact and forced the displacement of millions of farmers in a country that has scarce arable land.

Many of the 1.4 million people obliged to move to make way for the Three Gorges Dam have struggled to regain their livelihoods and settle into new homes, according to the Cabinet’s report on its problems.

The dam’s operator says it had spent nearly 25 billion yuan ($3.8 billion) on poverty and disaster alleviation as of the end of 2009 and that the government designated it as an “advanced” company in terms of its help in training those displaced by the project.