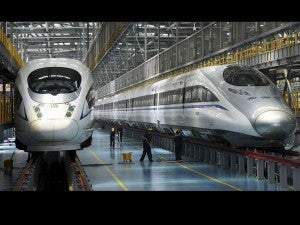 SHANGHAI — A report says China’s Railway Ministry has exaggerated how fast the new high-speed railway between Beijing and Shanghai is meant to run and that the country’s own technology is still plagued by problems.

The financial magazine Caijing cites a former top engineer at the Railway Ministry, Zhou Yimin, as saying the trains’ maximum speed should be 300 kph (185 mph), instead of the targeted 350 kph (216 mph).

Zhou said China lacks its own core technology, despite its claims to have developed the world’s most advanced railways know-how after cooperation with foreign partners.