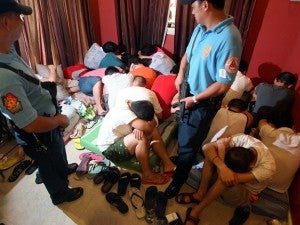 Korean, Chinese and Taiwanese nationals are caught during an anti-cybercrime raid in Cainta, Rizal.INQUIRER FILE PHOTO

MANILA, Philippines—Stripping for a sex show on the Internet? Think twice. Cybersex is now a crime in the Philippines.

It bans cybersex or the “wilful engagement, maintenance, control or operation, directly or indirectly, of any lascivious exhibition of sexual organs or sexual activity, with the aid of a computer, for favor or consideration.”

The key piece of legislation that Aquino signed into law Wednesday penalizes child pornography, some forms of Internet spam and even online libel, said Valte.

Valte said the law also prohibits unsolicited commercial communications, defined as the transmission of commercial electronic communication via a computer to advertise or sell products or services.

“These unsolicited communication has gotten the ire of many people,” Valte said.

Cyber-squatting, or the acquisition of a person’s domain name in bad faith to profit, mislead, destroy the reputation and deprive others from registering the same, is also now a crime, she said.

The law classified cybercrimes in the Philippines into two categories: Internet Crimes and Commercial Crimes committed with the use of the Internet.

Existing laws punishing Internet crimes in the Philippines are the Anti-Photo and Voyeurism Act of 2009, Anti-Child Pornography Act of 2009, and Anti-Trafficking in Persons Act of 2003.

The cybercrime law provides a range of penalties for different penalties.

The National Bureau of Investigation is tasked with enforcing provisions of the law. Together with the Philippine National Police, it will organize a cybercrime unit or center manned by cybercrime special investigators.

Courts will be designated as cybercrime courts to handle such crimes.

The law mandates the creation of an Office of Cybercrime under the Department of Justice to act as the central authority on international mutual assistance and extradition, as well as a Cybecrime Investigation and Coordinating Center to coordinate policy among agencies, and formulate national cyber security plan.

“The CICC shall be headed by the Executive Director of the Information and Communications Technology of this office,’’ Valte said. With TJ Burgonio, Philippine Daily Inquirer