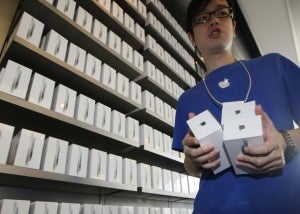 In this Friday, Sept. 21, 2012, file photo, a staff member of Apple Inc. shows the iPhone 5 to customers at the Apple store in Hong Kong. Apple Inc. said Monday Sept. 24, 2012, that it has sold more than 5 million units of the new iPhone 5 in the three days since its launch, less than analysts had expected. AP PHOTO/KIN CHEUNG

NEW YORK—Sales of Apple’s new iPhone 5 broke records in its launch weekend with sales above five million, a figure that disappointed analysts and pressured the company’s share price.

“Demand for iPhone 5 has been incredible and we are working hard to get an iPhone 5 into the hands of every customer who wants one as quickly as possible,” said Tim Cook, Apple’s chief executive, in a statement early Monday.

Apple opened sales Friday of the latest version of the iconic smartphone, leading to long queues in the nine launch countries.

Cook said that “while we have sold out of our initial supply, stores continue to receive iPhone 5 shipments regularly and customers can continue to order online and receive an estimated delivery date.

“We appreciate everyone’s patience and are working hard to build enough iPhone 5s for everyone,” he said.

Apple also said that the new mobile operating system iOS 6 had been downloaded for “more than 100 million iOS devices” since it was launched last week.

Analysts expect massive sales of the iPhone 5, which is lighter, slimmer and more powerful than its predecessors, even though the device has garnered only lukewarm reviews and has drawn complaints for its glitch-prone maps program.

Brian White at Topeka Capital Markets said the iPhone sales figures were “below our expectations” and added that “we were at the lower end of expectations.”

“We believe this shortfall is largely due to supply availability and the fact that most consumers are opting for the pre-order option,” White said in a note to clients.

“We remain aggressive buyers of Apple on any weakness in the stock price this morning as we believe Apple has another blockbuster on its hands with the iPhone 5 and we expect the ‘iPad Mini’ to launch in the coming weeks.”

Last week, Deutsche Bank analysts boosted their estimates for overall iPhone sales, saying they expected between five and six million in the opening weekend and 138 million by the end of 2012.

Ben Reitzes at Barclays said Apple is “facing significant production constraints” but that this will only push back sales a bit.

“We believe our estimates for Apple could still be conservative after the September quarter. We reiterate our overweight rating and our $810 price target,” he said in a note to clients.

Some analysts argue, however, that Apple has fallen short, as other companies such as Samsung improve rival offerings powered by Google’s Android operating system.

Apple also faced a barrage of criticism after it ditched Google’s maps application in favor of its own program riddled with errors. Many users protested that the new maps misplace some landmarks and leave others off altogether.