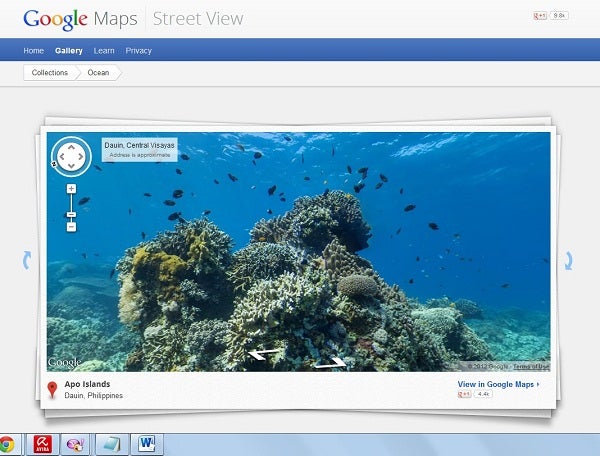 The first underwater panoramic images were added to Google Maps with the help of Catlin Seaview Survey scientific expedition, which hoped that the up-close view of underwater wonders would inspire people to protect them.

“This is a critical decade for coral reefs,” Catlin project director Richard Vevers told Agence France-Presse while providing a preview of the Google reef mapping project.

“We need to be recording them as fast as we can and involving people to halt the decline, which is alarming at the moment.”

A small team of Catlin divers used a special camera to capture panoramic imagery woven together at Google Maps and in a special Street View online gallery to let people swim along without getting wet.

“With these vibrant and stunning photos you don’t have to be a scuba diver or even know how to swim to explore and experience six of the ocean’s most incredible living coral reefs,” said Google Maps and Earth vice president Brian McClendon.

“Now, anyone can become the next virtual Jacques Cousteau and dive with sea turtles, fish and manta rays in Australia, the Philippines and Hawaii.”

The underwater locations include the Great Barrier Reef, the Molokini Crater, and the Apo Island marine reserve.

A channel at the Google+ social network devoted to the Catlin expedition, which has the potential to discover new species of marine creatures during a “deep reef” phase, has attracted about 1.4 million followers.

Undersea imagery could be seen online at maps.google.com/ocean.

“This is a project that can engage people,” Vevers said.

“We need to bridge the gap between scientific understanding and public awareness… We need people to be able to experience the ocean.”