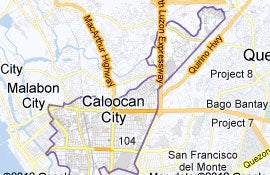 MANILA, Philippines—Two cybersex workers and their alleged manager were arrested Wednesday in Caloocan City and police said they could be charged for violating the new anti-cybercrime law.

Mark Joseph Borja, 24, Railene Querto, 29, were found naked and performing sexual acts in front of a webcam for a foreign client when police swooped down on a house along Libis Espina Street in Caloocan City around 12:30 a.m. Wednesday, case investigator Police Officer 2 Archie Isidro said.

Jinky Isla, 26, owner of the house, was also arrested on suspicion of running the “small-time” internet sex business, Isidro said.

“They were naked and were using sex toys when we entered,” Isidro said.

The cybersex den was operating daily from 11 p.m.  until 4 a.m., he said, adding that it appeared to be a “small-time business” since only one computer unit was found during the raid.

The three were being held  at the Caloocan police office and would undergo inquest proceedings for possible violation of the newly-passed Republic Act 10175 or the anti-cybercrime law.