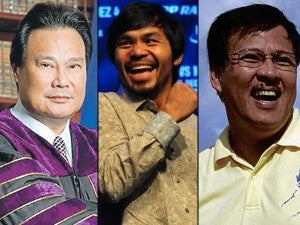 Former Chief Justice Renato Corona, the late Interior and Local Government Secretary Jesse Robredo and boxing superstar Manny Pacquiao topped the list of most-searched Filipino  newsmakers in the first nine months of the year, according to the listing of search engine Google.

The latest list furnished to the Inquirer showed that Corona was the most-searched newsmaker on www.google.com.ph as of September because of the Senate impeachment trial that was watched by millions of Filipinos both here and abroad. In May 2012, Corona was found guilty of betrayal of public trust for failing to declare his full assets and net worth.

Robredo, on the other hand, made the headlines last month when he died in a plane crash off Masbate. His death sparked a massive outpouring of support and condolences which made him a hot topic on Google.

Coming in fourth is Robert Blair Carabuena, a human resources manager of Philip Morris, who appalled the nation  when he was caught on camera assaulting a poor Metro Manila Development Authority traffic officer.

Others on the list of top 10 newsmakers in the first nine months of this year are: Iggy Arroyo, a lawmaker and brother-in-law of former President Gloria Macapagal-Arroyo, who died in January, sparking a row between his two wives;  Dolphy, the King of Comedy who died on July 10; Fil-Mexican Jessica Sanchez, who was runner up in the 11th season of American Idol; Ramon Tulfo, who tangled with celebrity couple Raymart Santiago and Claudine Barretto at the airport; Sen. Miriam Defensor-Santiago, whose comments during the impeachment trial aroused the interest of Filipinos, and Monique Lhuiller, a Filipino designer whose creations were showcased during the New York Fashion Week show.

The list was produced using the Google Insights for Search, which monitors what’s popular on the Internet.  It can show how many searches were done for the terms entered, relative to the total number of searches done on Google over time, in this case over the first nine months.