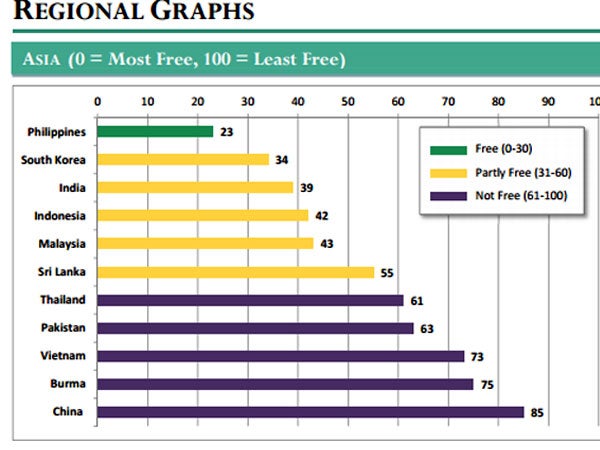 MANILA, Philippines—Filipino netizens are the freest in Asia and sixth in the world when it comes to Internet freedom, according to a study by a Washington DC-based advocacy group released as outrage builds in the Philippines over a new cybercrime law.

The study of Freedom House found the Philippines having the greatest degree of Internet freedom among the countries examined in Asia. Second in rank is South Korea and next is India. China, meanwhile, belongs to the “Not Free” category.

In the entire world, Estonia has the freest cyberspace while the United State has the second freest, the Freedom on the Net 2012: A Global Assessment of Internet and Digital Media showed.

The Philippines, which has 29 percent internet penetration as of 2011, shares the sixth spot with Italy.

“Iran, Cuba, and China received the lowest scores in the analysis,” said the study.  “Eleven other countries received a ranking of Not Free, including Belarus, Saudi Arabia, Uzbekistan, and Thailand.”

“A total of 20 of the 47 countries examined experienced a negative trajectory in internet freedom since January 2011, with Bahrain, Pakistan, and Ethiopia registering the greatest declines,” it said.

“Several downgrades, particularly in the Middle East, reflected intensified censorship, arrests, and violence against bloggers as the authorities sought to quell public calls for reform. In Saudi Arabia, Ethiopia, Uzbekistan, and China, authorities imposed new restrictions after observing the key role that social media played in the uprisings in Egypt and Tunisia,” the study said.

The study came as Filipinos protest the Cybercrime Prevention Act of 2012, a new law that could see people sentenced to 12 years in jail for posting defamatory comments on social media networks.

The stated aim of the cybercrime law is to fight online pornography, hacking, identity theft and spamming in the conservative Catholic nation amid police complaints they lack the legal tools to stamp out Internet crime.

However, it also includes a blanket provision that puts the country’s criminal libel law into force in cyberspace, except that the penalties for Internet defamation are much tougher compared with old media.

It also allows authorities to collect data from personal user accounts on social media and listen in on voice/video applications, such as Skype, without a warrant. With Agence France-Presse 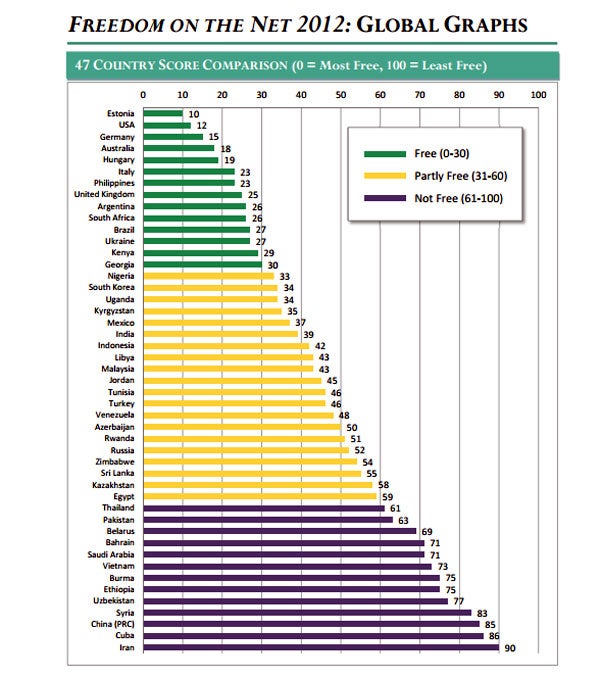 Also read: Filipino netizens are the freest in Asia — but maybe not for long

Tulfo turned down offer to be Pacquiao’s VP