Due to ‘hacktivists’, lawmakers push for internet regulation 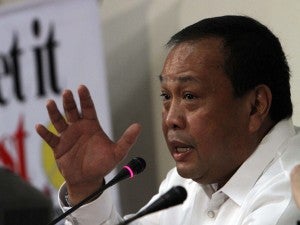 MANILA, Philippines—Legislators have filed a measure proposing to repeal contentious provisions of the Cybercrime Prevention Act but fresh attacks on government websites by ‘hacktivists” made some lawmakers feel that Internet use in the country should be regulated to protect the interests of its people.

Early morning radio reports said hackers attacked government websites like the Official Gazette, the Senate, the House of Representatives and the National Bureau of Investigation.

Reacting to this, House majority leader Neptali Gonzales II said that widespread hacking attacks were “proof that internet use should be regulated.”

This was somewhat echoed by Citizens’ Battle Against Corruption (Cibac) Party-list Representative Sherwin Tugna.  He said that while “freedom of expression is prime because a healthy debate, criticism and discussion of social issues and government issues in the internet world is key to a progressive democracy”, it does not include hacking.

“Intrusion and entry of hackers into the private domain of other entities (government) and individuals is patently illegal,” he said.

Kabataan Party-list Representative Raymond Palatino and Bayan Muna Party-list Representative Teddy Casiño on Tuesday filed House Bill 6613, which proposed to repeal controversial provisions of the new law.
Speaker Feliciano Belmonte Jr. said they would respect measures filed by legislators seeking to repeal contentious provisions of Republic Act No. 10175 but reminded the public that freedom of expression was not absolute and that individuals should be responsible in posting statements online.

“There are already pending bills in the House and in the Senate to amend the Cybercrime Law. We cannot right a wrong by committing another wrong act,” said Tugna.

Media relations staff of the House of Representatives on Wednesday denied that the website of the lower chamber of Congress was attacked by ‘hacktivists’ before Wednesday dawn.

A radio report earlier said that both websites of the House of Representatives and the Senate were inaccessible at around 4 a.m. but are now up and running. Many other government websites have been targeted by global hackers operating under the group Anonymous Philippines.

House Public Relations and Information Bureau (PRIB) executive director Bernadette dela Cuesta relayed information from their staff, which stated that there was no truth to a radio report that listed the website of the House of Representatives (congress.gov.ph) among those hacked in a pre-dawn attack as the Cybercrime Prevention Act took effect.