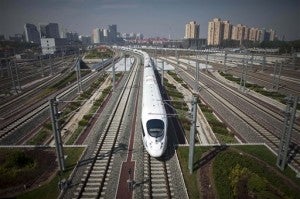 TOO EXPENSIVE? A CRH high-speed train leaves the Beijing South Station for Shanghai during a test run on the Beijing-Shanghai high-speed railway in Beijing, China (AP Photo).

A train carrying government officials, managers of the companies that built the line and reporters left Beijing for the 1,318-kilometer (824-mile) trip. It was due to take about five hours, or half the time of conventional rail.

The communist government is building thousands of miles (kilometers) of high-speed rail to link together China’s far-flung regions and show off its rising wealth and technological prowess.

The multibillion-dollar plan has provoked complaints that it is too expensive for a country where millions of people still live in poverty. The government announced in April the top speed of the fastest lines would be reduced from 350 kph (220 mph) to 300 kph (190 mph) and ticket prices would be cut.

China’s trains are based on Japanese, French and German technology but its manufacturers are trying to sell to Latin America and the Middle East. That has prompted complaints Beijing is violating the spirit of licenses with foreign providers by reselling technology that was meant to be used only in China.

Monday’s test run comes ahead of celebrations of the 90th anniversary of the founding of the Communist Party on July 1.

In a statement, the Ministry of Railways said it made extensive preparations for safety and security. They include plans for daily inspections of tracks and other facilities and an earthquake monitoring system.

The Beijing-Shanghai line crosses seven provinces that include some of China’s most densely populated and economically developed areas.

Critics say railway officials have diverted too much money to high-speed rail and should be expanding lower-cost traditional rail.

During the Lunar New Year holiday in February, working class travellers complained they couldn’t afford high-speed tickets and regular trains were sold out. A migrant worker became an Internet sensation when he stripped to his underwear to protest outside a ticket office after he waited 14 hours in line but couldn’t get tickets for his family.

The Ministry of Environmental Protection said earlier this year that construction of one line and operation of another already completed, both in China’s east, must stop until they receive environmental approval.