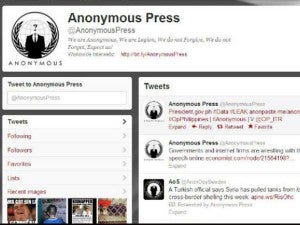 MANILA, Philippines—Malacañang on Saturday said it was unaware of any  documents supposedly  hacked or leaked  by  international  hacktivist group Anonymous.

“I am not aware of that. These guys could have picked it up anywhere. It may not even be authentic,” Carandang said.

“No information on that. (There was) no report on that from our web administrators,” Coloma said.

Two spread sheet files were made available via Twitter by the “hacktivist group” detailing the work and financial plan of an unspecified Philippine government unit. The documents were purportedly approved by a certain Ana Marie P. Daep.

Carandang said there was no employee at the Office of the President named Daep. The officer in charge for Social Marketing Service of the Department of Social Welfare and Development is Ana Marie P. Daep.

Hacktivists have been attacking mostly government sites since Aquino signed into law the Cybercrime Prevention Act of 2012. People in the social media and the Internet press condemn the passage of the law, saying it infringes on the freedom to express and of the press.