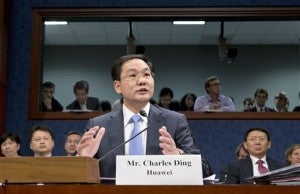 WASHINGTON — American companies should avoid doing business with China’s two leading technology firms because they pose a national security threat to the United States, the House Intelligence Committee is warning in a report to be issued Monday.

The panel says U.S. regulators should block mergers and acquisitions in this country by Huawei Technologies Ltd. and ZTE Corp, among the world’s leading suppliers of telecommunications gear and mobile phones.

Reflecting U.S. concern over cyber-attacks traced to China, the report also recommends that U.S. government computer systems not include any components from the two firms because that could pose an espionage risk.

“China has the means, opportunity, and motive to use telecommunications companies for malicious purposes,” the report says.

The recommendations are the result of a yearlong probe, including a congressional hearing last month in which senior Chinese executives of both companies testified, and denied posing a security threat.

A U.S. executive of one of the companies said the firm cooperated with investigators, and defended its business record. Huawei is a “globally trusted and respected company,” said William Plummer, vice president for external affairs.

On Monday, ahead of the report’s release, a Chinese foreign ministry spokesman said investment by China’s telecommunications companies in the United States showed the countries have mutually beneficial relations.

“We hope the U.S. will do more to benefit the interests of the two countries, not the opposite,” said spokesman Hong Lei at a regular briefing.

The bipartisan report is likely to become fodder for a presidential campaign in which the candidates have been competing in their readiness to clamp down on Chinese trade violations. Republican Mitt Romney, in particular, has made it a key point to get tougher on China by designating it a currency manipulator and fighting abuses such as intellectual property theft.

The committee made the draft available to reporters in advance of public release Monday, but only under the condition that they not publish stories until the broadcast Sunday of a CBS’ “60 Minutes” report on Huawei. In the CBS report, the committee’s chairman, Rep. Mike Rogers, R-Mich., urges American companies not to do business with Huawei.

The panel’s recommendations will likely hamper Huawei and ZTE’s ambitions to expand their business in America. Their products are used in scores of countries, including in the West. Both deny being influenced by China’s communist government.

“The investigation concludes that the risks associated with Huawei’s and ZTE’s provision of equipment to U.S. critical infrastructure could undermine core U.S. national-security interests,” the report says.

The report says the committee received information from industry experts and current and former Huawei employees suggesting that Huawei, in particular, may be violating U.S. laws. It says that the committee will refer the allegations to the U.S. government for further review and possible investigation. The report mentions allegations of immigration violations, bribery and corruption, and of a “pattern and practice” of Huawei using pirated software in its U.S. facilities.

Huawei is a private company founded by a former Chinese military engineer, and has grown rapidly to become the world’s second largest supplier of telecommunications network gear, operating in more than 140 countries. ZTE Corp is the world’s fourth largest mobile phone manufacturer, with 90,000 employees worldwide. While their business in selling mobile devices has grown in the U.S., espionage fears have limited the companies from moving into network infrastructure.

“The committee finds that the companies failed to provide evidence that would satisfy any fair and full investigation. Although this alone does not prove wrongdoing, it factors into the committee’s conclusions,” it says.

In Washington, Huawei executive Plummer said Friday the company cooperated in good faith with the investigation, which he said had not been objective and amounted to a “political distraction” from cyber-security problems facing the entire industry.

All major telecommunications firms, including those in the West, develop and manufacture equipment in China and overlapping supply chains require industry-wide solutions, he added. Singling out China-based firms wouldn’t help.

Plummer complained that the volume of information sought by the committee was unreasonable, and it had demanded some proprietary business information that “no responsible company” would provide.

In justifying its scrutiny of the Chinese companies, the committee contended that Chinese intelligence services, as well as private companies and other entities, often recruit those with direct access to corporate networks to steal trade secrets and other sensitive proprietary data.

It warned that malicious hardware or software implants in Chinese-manufactured telecommunications components and systems headed for U.S. customers could allow Beijing to shut down or degrade critical national security systems in a time of crisis or war.

The committee concluded that Huawei likely has substantially benefited from the support of the Chinese government.

Huawei denies being financed to undertake research and development for the Chinese military, but the committee says it has received internal Huawei documentation from former employees showing the company provides special network services to an entity alleged to be an elite cyber-warfare unit within the People’s Liberation Army.

The intelligence committee recommended that the government’s Committee on Foreign Investment in the United States, or CFIUS, bar mergers and acquisitions by both Huawei and ZTE. A multi-agency regulatory panel chaired by Treasury Secretary Timothy Geithner, CFIUS screens foreign investment proposals for potential national security threats.

ZTE has also enjoyed growth in its sale of mobile devices, although in recent months it has faced allegations about banned sales of U.S.-sanctioned computer equipment to Iran. The FBI is probing reports that the company obstructed a U.S. Commerce Department investigation into the sales.

The intelligence panel says ZTE refused to provide any documents on its activities in Iran, but did provide a list of 19 individuals who serve on the Chinese Communist Party committee within the company. ZTE’s citing of China’s state secrecy laws for limiting information it could release only added to concern over Chinese government influence over its operations, the report says.