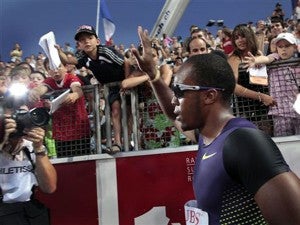 American sprinter Walter Dix being greeted by the crowd after winning the 200 meter race at the Athletissima in Lausanne, Switzerland. In a sport known for flash, sprinter Walter Dix must be careful not to utilize social networking and blogging "for commercial and/or advertising purposes”, something becoming harder to do after winning two bronze medals at the Beijing Olympics (AP Photo).

LAUSANNE, Switzerland — The International Olympic Committee has encouraged athletes to use social media at the 2012 London Games, although misusing Twitter and Facebook could result in them being excluded from competing.

In an advisory document for competing countries, the IOC “actively encourages and supports athletes and other accredited persons at the Olympic Games to … post, blog and tweet their experiences.”

However, the Olympic body has warned it can withdraw accreditation, shut down online operations and start legal action for damages if rules are broken.

The golden rule for athletes is to avoid using social networking and blogging “for commercial and/or advertising purposes.”

The IOC said athletes in London “are not permitted to promote any brand, product or service.”

Games-time rules — which apply from July 16-Aug. 15 — also protect the rights of Olympic broadcasters and sponsors.

“Postings, blogs or tweets should be in a first-person, diary-type format and should not be in the role of a journalist,” the IOC document stated.

“Participants and other accredited persons cannot post any video and/or audio of the events, competitions or any other activities which occur at Olympic venues.”

The IOC also urged athletes not comment on their opponents or reveal confidential information, and to conform to the Olympic spirit and charter.

Posts, tweets and blogs should “be dignified and in good taste, and not contain vulgar or obscene words or images.”

“Apart from that, we want people to share as much as possible their personal experience of the games,” the Olympic body said.

The IOC has drawn up the rules in the aftermath of violations during the last Winter Olympics.

“Unlike in Vancouver, where the rules were adapted to fit changed circumstances, the rules in force in London have been properly codified,” the IOC said.