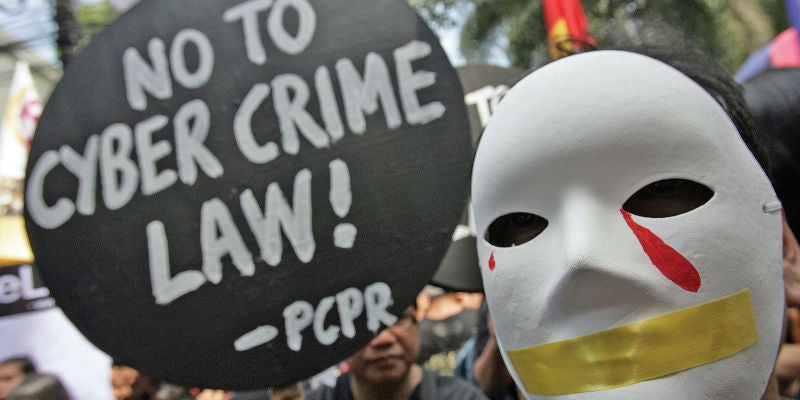 CYBERPOWER Militant groups gather outside the Supreme Court in Manila on Tuesday morning to protest the Cybercrime Prevention Act, shortly before the high court issued a temporary restraining order for four months against the controversial law. NIÑO JESUS ORBETA

Some raised their fists and others jumped for joy as the Supreme Court’s temporary restraining order (TRO)  against the Cybercrime Prevention Act was announced.

Renato Reyes Jr., secretary general of Bagong Alyansang Makabayan (Bayan), broke the news to around 500 militants, students, journalists, bloggers and netizens massed in front of the court in a protest dubbed “Black Tuesday,” tying up traffic on Padre Faura Street and prompting police to halt traffic in the area.

“This is a proud moment for us, Filipinos. The TRO is an achievement and the credit goes not only to the 15 petitioners but to the millions of Filipinos who tweeted, blogged, posted comments and rallied on the streets,” Reyes said.

The group boycotted Tuesday’s multisectoral forum on the implementing rules of the cyberlaw and instead proceeded to the Supreme Court.

In a statement, the National Union of Journalists of the Philippines (NUJP) said: “The 120-day TRO gives a brief respite but the protests must continue. We call on the Supreme Court to render a final decision declaring the law null and unconstitutional. We call on the legislators to do the right thing and finally pass a law to decriminalize libel.”

The NUJP said the law would “set back decades of struggle against the darkness of ‘constitutional dictatorship’ and replace it with ‘cyber authoritarianism.’”

Kenneth Keng of Philippine Internet Freedom Alliance (Pifa) said, “We hope that the amendments proposed  in both Houses can form the foundation of a new law, this time ensuring every citizen’s right to freedom of expression online.”

Pifa organized the nationally coordinated protest which started at 9 a.m. and ended past noon, shortly after the TRO was declared.

The protesters carried placards with images of President Benigno Aquino and the word “impeach.” Tarpaulins with photos of the senators who approved the cyberlaw were also hoisted as the protesters chanted,  “No to Cyber Martial Law.”

A freedom board, a T-shirt printing station and a mug shot photobooth were also put up.

Casiño said the impact of the cyberlaw was not only on netizens but also on Filipinos who give importance to access to information and right to free speech.

Marlene Aguilar, mother of road rage suspect Jason Ivler, received the biggest applause when she said: “The legislators approved the law because they are old and don’t even know how to turn on the computer.”

Aquino not for press freedom

Lawyer Harry Roque Jr., of the Center for International Law and the Media Defence South East Asia, urged the public to remain vigilant.

“The TRO reaffirmed the view submitted by the petitioners that the law is unconstitutional for being violative of the rights to freedom of expression, and the due process and equal protection clauses of the Constitution,” Roque said.

Luis Teodoro, former dean of the University of the Philippines College of Mass Communications, scored President Aquino for approving the cybercrime law even as the country marked the 40th anniversary of martial law.

“Over the last two years, this President has pretended to be for free expression, press freedom but we are seeing that that is not true because he is not only defending this cybercrime law,” Teodoro said.

“The context here is that he also promised the passage of the Freedom of Information Act but nothing happened. He is now claiming the media is too powerful. So, fundamentally he is not for press freedom and freedom of expression.”

Brad Adams, Asia director of the New York-based Human Rights Watch, said in a statement that the Supreme Court “should now go further by striking down this seriously flawed law.”

“Congress, if it still wants to have a law governing online activity, should ensure that such a law will not infringe on civil liberties, human rights, the Constitution and the Philippines’ obligations under international law,” Adams said.

“All provisions in Philippine law that allow for imprisonment for peaceful expression should be repealed. Congress should also ensure that any discussion on proposed laws be done in a transparent manner.”

Blogger Anthony Ian Cruz, of the newly formed Bloggers and Netizens for Democracy (BAND), said, “The unanimous vote for the TRO is a bad omen for President Aquino who remains remorseless about it.”

In Iloilo City, some 30 members of Bayan and Karapatan massed in front of the office of the Regional Trial Court branches at Jaro district. The protesters wore black shirts and had black mouth gags to symbolize the law’s perceived threats to freedom of expression.

“It’s not yet over. We must remain on guard,” said blogger Antoine Greg Flores.

Dozens of journalists affiliated with the NUJP held protests in the cities of Davao and Cagayan de Oro, hailing the Supreme Court move as a “tactical victory for the struggle against the Cybercrime Prevention Law and in the fight for press freedom.”  With reports from Nestor P. Burgos, Inquirer Visayas; and Karlos Manlupig, Germelina Lacorte and JB Deveza, Inquirer Mindanao