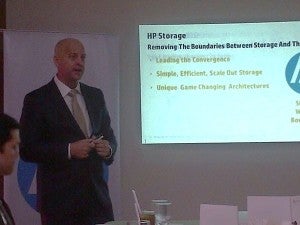 MANILA, Philippines—International technology company Hewlett-Packard (HP) unveiled on Thursday its new Storage technology that has a “Ferrari-speed” minus the Ferrari price tag.

Mike Prieto, vice president and general manager of HP Asia Pacific and Japan, said in a media roundtable discussion that HP 3PAR P10000 Storage has double the speed of their closest competitor because of its new solid-state drives (SSD).

The new SSD technology is better than the standard hard disk drives (HDD) because it does not have a spinning disk; less moving parts means better durability, faster storage retrieval, and smaller physical footprint. SSDs however are more expensive compared to HDD.

The HP 3PAR P10000 Storage can hold a maximum of 512 SSDs in a single array which “reduces equipment costs, data-center footprint, and energy expenses.”

“Client cost per input/output operations per second is reduced by 70 percent, and cost per kilowatt hour is cut by more than 80 percent, making all-SSD HP 3PAR P10000 Storage ideal for performance-driven application,” HP said in their statement released during the event.

Bernard Chitty, HP storage division general manager, said that clients are able to save by utilizing the HP 3PAR Adaptive Optimization software which allows SSD and HDD to be utilizied at the same time.

According to research conducted by HP, only 10 percent of a company’s data are active at any given moment. The Adaptive Optimization software moves the active data from the slower HDDs to the faster SSDs for increased response as the data is being accessed.

The system automatically detects which data are being accessed more frequently and puts these into the SSD. But if the data is no longer active, it is automatically moved back down to the HDDs where they can be stored for longer time while not in use.

The perfect balance between high-speed SSDs and low-cost HDDs allows for faster speeds while maintaning a low-cost.

Prieto said that “the ability to intelligently automate data mobility between HP ProLiant servers and HP 3PAR systems within array tiers fully actuallizes SSD performance and efficiency so clients can focus more time growing the business instead of managing the back office.”

Prieto further added that the 3PAR converged storage system’s “ease of use and simplicity” will help companies better manage their IT systems unlike previous storage and server systems that are more complex.

He added that their new 3PAR system is already being used in “every industry I can think of.”

Prieto added that sectors like manufacturing, telecommunications, hospital, airline, banks, mining, are those who have already began adopting the new systems.