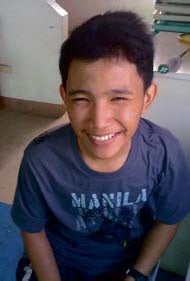 Malala Yousafzai and Jann Ericko Medina are both 14 years old and live worlds apart. Yet, they have discovered the power of their voices in fighting for their rights.

But certainly, Medina, a Filipino, is luckier than Yousafzai, who nearly paid for it with her life after the Taliban shot her in the head last week while she was returning home from school in a van in Pakistan’s Khyber-Pakhtunkhwa province.

Yousafzai is fighting for her right to education. (The Taliban, which is pushing for a theocratic and obscurantist interpretation of Islam, is against education for girls. The attack on her drew global condemnation of the Taliban and support for her cause.)

Medina is fighting for his right to free speech in cyberspace.

As of Sunday, Medina’s petition against the Cybercrime Prevention Act of 2012, which he posted on the world’s largest petition platform, change.org, has generated 6,179 signatures supporting his call for Sen. Edgardo Angara to amend the law and remove the libel provision.

“Today (Saturday) it hit 6,000 signatures, but it has been growing since September. It took off last week and then it became really viral. There were several petitions created on the site, but the petitions that really took off were his and the one started by [the] Kabataan (party-list group),” Christine Roque, change.org’s Philippines campaigner, told the Inquirer.

Roque is particularly proud of Medina because the teenager relied on his social awareness and passion to be heard when he posted his online petition and yet he was able to rally thousands of supporters.

A blogger and active Facebook and Twitter user, Medina told the Philippine Daily Inquirer that he had discovered change.org after stumbling on the campaign to fight for the right of Muslims to wear hijabs. Worldwide, change.org has 20 million users and receives around 100 petitions every month.

Medina logged on to the site and posted his petition in the middle of the outrage over the controversial provisions in the cybercrime law that threatened the Filipinos’ civil liberties, especially the right to freedom of expression.

“I want to meet Mr. Angara and give him the signatures I have gathered and explain to him why it is important for us bloggers and netizens to amend the cybercrime law,” he said in the interview. (Roque sought the consent of Medina’s mother for the interview as Medina is a minor).

He believed that the legislators behind the law were not really Internet users who understood what cyberspace was all about. In fact, he noted, Angara was not even active on his Twitter account.

Medina was not sure if Sen. Vicente Sotto III was keeping an account in any social media platforms.

A senior high school student at La Purisima Concepcion Academy in Malabon City, Medina wants to be a biochemist or a journalist. He is a student council treasurer and, for a time, wrote for the school paper.

He loves to discuss current events with his grandparents, which explains why he is conversant with many sociopolitical issues in the country. “They encourage me to speak my mind,” he said of his grandparents.

While supportive of his blogging, Medina said his parents would rather that he focus on his studies. His father, Priscilo, works as a seaman, while his mother, Mary Jane, stays at home to take care of him and his 10-year-old sister.

His mother makes sure that he spends only 30 minutes a day on the Internet for his social networking activities, he said. After that, the two of them would review his lessons and assignments—at times, logging on to Google for online research.

Medina began using the Internet when he was in Grade 3 and discovered blogging when he was in the sixth grade. He first wrote about mundane topics, such as riding a tricycle.

Describing himself as a “political geek,” he eventually discovered that his blog and other social media platforms gave him a voice in democratic citizenship—his age notwithstanding.

When he was in second year high school, he began to blog about the country’s budget for science and national development, and the reproductive health bill.

He told the Inquirer that cyberspace empowered citizens regardless of age.

“Cyberspace is where people can express their opinions … . They become the watchdog of society. For example, this coming elections, how can you give the people a voice to criticize government officials who are running? We will lose that right to criticize (with the cybercrime law),” Medina said.

Young people his age should also be expressing their own opinions as the “future citizens of the country,” he said.

“We should be empowered to express our opinions on current issues. As young Filipinos, we should have a voice,” Medina said.

He said government leaders, who insisted on regulating freedom of speech, did not recognize the importance of cyberspace as another medium of expression.

“They should adjust with the times, not the other way around,” he said.

He expressed the hope the legislators would amend the law and President Aquino would rethink his position on its libel provision.

Medina said that when his mother learned about the libel provisions, she was worried that his blog posts about political and social issues would get him into trouble. She reminded him to be careful with what he would be posting on Facebook and Twitter.

On his blog, jannmeds.blogspot.com, the teenager wrote his thoughts on the cutting of trees to pave the way for the expansion of SM Baguio, on Independence Day and on the country’s judicial system. He even fired off a scathing message to former President Gloria Macapagal-Arroyo on her birthday.

“I jokingly told my mother not to worry because I won’t be detained in the national penitentiary, just at the DSWD juvenile center because I’m a minor,” Medina said, laughing.

But the boy did worry. Medina stopped posting on his blog and instead wrote and saved his commentaries in MS Word. Among his topics were political dynasties and candidates for senators who he thinks are not yet qualified for the post.

Medina feared that if he posted these on his blog, politicians might find his comments libelous and he could be test case No. 1 for the cybercrime law.

However, with the Supreme Court’s issuance of a temporary restraining order against the law, Medina said he was thinking of posting his new commentaries on his blog.

Right thing to do

The fact that his petition has garnered more than 6,000 signatures, and has even triggered a debate between veteran journalists Teddy Boy Locsin and Twink Macaraig on Twitter, was an affirmation for Medina that his campaign for his right was the right thing to do.

“Change.org empowers anyone anywhere to make a difference. Jann’s energy and passion to fight for Internet freedom as a young netizen are so inspiring. I think with this petition on change.org, he is on his way to cementing his place as a mover of his generation. He proves that no matter how young you are, you have the power to create positive change in society today,” Roque said.

Medina said the bottom line, as well, was for all netizens to be responsible people.

He said netizens should base their criticisms, opinions and commentaries on facts.

“It’s our only defense so that our right will not be taken away. It goes like this: Use your rights well, prove to them that we deserve it,” Medina said.