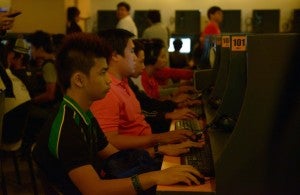 Customers at an Internet cafe in Manila. Online social networking contributes to the rise in the cases of HIV/AIDS in the Philippines, according to a study conducted by the Department of Health. (The photo is not in any way directly related to the story and is purely for illustrative purposes.) AFP PHOTO/JAY DIRECTO

Online social networking contributes to the rise in the cases of human immunodeficiency virus/acquired immunodeficiency syndrome (HIV/AIDS) in the country, according to a study conducted by the Department of Health.

The mushrooming of social networking sites, which cater to people looking for sex partners, has been pinpointed as one of the major factors in the rise of HIV/AIDS cases in the Philippines, Dr. Eric Tayag, director of the National Epidemiology Center (NEC), told a seminar for media on HIV/AIDS Thursday.

“Through online networking sites, MSM can meet without fear of negative social consequences,” he said.

With the Internet increasing the rates of risky behavior, online social networking can now be included as an evolving risk factor for HIV/AIDS, Tayag said.

Health authorities list the risky behaviors contributing to the rise of HIV/AIDS in the country as not using condoms, multiple sex partners, men having sex with men and injecting drug users.

The mode of HIV/AIDS transmission, as well as the profile of infected persons, has changed in recent years from heterosexual intercourse to “men who have sex with men,” Tayag said.

He clarified that men who engage in sex with men were not all homosexuals. “HIV/AIDS is not about being gay but about men having unprotected sex with men,” Tayag said.

About 79 percent of the respondents, or 143, claimed to have used condoms during sexual encounters but majority said they do not do it consistently.

“Not consistent use of condom is also a risk factor,” said Tayag.

He said one of the reasons MSM gave for not using condoms during sexual encounters was condom unavailability.

“They said condoms were not available, some said they don’t like to use them. Others claimed their partners won’t allow them to use condoms or they think it’s not necessary to use one. A small percentage said they do not know or they forgot to use condom,” he said.