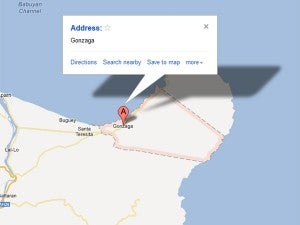 BAYOMBONG, Nueva Vizcaya—The leader of an antimining group in Cagayan was arrested Thursday for posting an allegedly libelous account about a mining issue on her Facebook page in May last year.

Esperlita Garcia said she was arrested at her home in Calayan, Gonzaga, Cagayan, on the strength of a warrant issued by Judge Conrado Tabaco of the Regional Trial Court of Aparri.

“What really bothers me is how the prosecutors and the judge determined that I should be arrested when I know that the law that supposedly punishes online libel was passed only this year and was even (restrained) by the Supreme Court,” said Garcia, referring to Republic Act No. 10175 or the Anti-Cybercrime Act of 2012.

Garcia is president of the Gonzaga Alliance for Environmental Protection and Preservation, a people’s organization that has been leading the opposition to the magnetite sand extraction project operated by Chinese firms in Gonzaga. The companies were allowed to mine magnetite sand by the Cagayan provincial government.

The libel charge was filed by Gonzaga Mayor Carlito Pentecostes Jr. over an account Garcia posted on her Facebook page about an aborted antimining rally in the town on April 30, 2011.

She said she was merely giving a factual account of what had transpired during the rally where she quoted the mayor before demonstrators at St. Anthony Academy in Gonzaga.

“[The arrest warrant] shocked me because I had not received any notice about the case since I filed my counteraffidavit last year,” Garcia told the Inquirer by phone.

The Inquirer tried to reach prosecutor Mila Acacio but her staff said she was not at her office in Aparri.

A Department of Justice official based in Tuguegarao City supported Garcia’s objection, saying there was no law yet against libelous statements made online.

“The reason the cybercrime law was passed was that the provisions of the Revised Penal Code do not embrace online libel. But even that law (RA 10175) is not yet in effect,” said the official.

Garcia, 62, said her arrest was an act of harassment, narrating how she was taken into custody by National Bureau of Investigation (NBI) agents.

“I am a senior citizen but I was treated like a hardened criminal. They did not even give me a chance to bathe or change from my house clothes. They just dragged me into a car,” she said.

The agents brought Garcia to the NBI regional office in Tuguegarao City, about three hours from Gonzaga, where she was detained overnight Thursday.

On Friday, she was released after posting P10,000 bail.