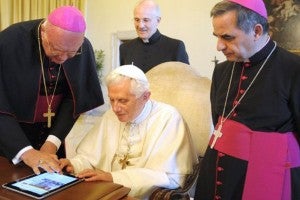 VATICAN GOES ONLINE IN FIGHT VS CHILD ABUSE. Pope Benedict XVI uses a tablet in his private office at the Vatican on June 28, 2011 to launch a new website making it easier to access all Vatican news online. The Vatican is now turning to the Internet in its struggle against child abuse with a new website allowing clergy around the world to share information on eradicating the problem. AFP FILE PHOTO

VATICAN CITY – The Vatican is turning to the Internet in its struggle against child abuse with a new website allowing clergy around the world to share information on eradicating the problem.

A key figure behind the initiative is German psychologist priest Hans Zollner from the Vatican’s Gregorian University, who spoke to Agence France-Presse about the need for fundamental changes in how the Catholic Church handles abuse cases.

“Bishops have to give priority to victims,” said Zollner, a member of the order of Jesuits, often seen as intellectuals inside the Church.

“People working inside dioceses and religious orders should be taught to listen to them. All complaints have to be taken seriously,” he said.

Zollner’s university will host a conference next February at which the new e-learning centre is expected to be launched, with some 200 experts, diocesan officials and representatives of congregations attending.

It will be “a step … on a long and painful path,” Zollner said, adding the website would bring together the latest research on child abuse and Church laws, while allowing churches in different countries to have their say.

The website will be in five languages – English, French, German, Italian and Spanish – and the project is funded to last three years.

The Church is struggling to deal with rising anger and a string of lawsuits following thousands of abuse claims in Europe and the United States.

But many in the Church are concerned that the cases uncovered so far may only be the tip of the iceberg since abuses in much of the developing world – including in Africa and Latin America – have so far received little attention.

Pope Benedict XVI’s ever stronger denunciations of abuse are bringing some changes, however, and national bishops conferences around the world are set to come up with common guidelines against paedophiles by May 2012.

Zollner explained the process is slow and complex because of wide variations in national laws and the need for international coordination.

“The general sensitivity to the problem has clearly increased,” he said.

“But the Church is not a monolithic block. Sensitivities are very different. A critical point appears to have been reached,” he added.

“Many bishops are now saying: ‘We have to act’. There needs to be a more consistent and coordinated response as wanted by the Holy Father.”

The common agreement in the Church is that those responsible “must receive their punishment according to Church law and criminal law,” he said.

Among the changes Zollner has been working on, is stricter psychological tests for would-be priests to identify possible abusers.

The e-learning center will make use of research from the child and adolescent psychiatry department at Ulm University in Germany, he said.

Abuse victims groups have accused the Vatican of failing to take the problem of paedophilia seriously early on, of not cooperating with police and allowing priests and bishops who covered up for abusers to go unpunished.

“For almost all victims, the most important thing is to be heard by a representative of the institution whose members have hurt them,” Zollner said.

Victims “should have the chance to express all their pain, anger, depression and fears to an official representative of the Church,” he added.

“The pope’s stance is there should no longer be priests who are protected and moved along. The Church must no longer give the impression it is shielding the perpetrators as it has often been seen as doing in the past,” he said.

The Jesuit father added: “It makes the victims suffer a second time.”