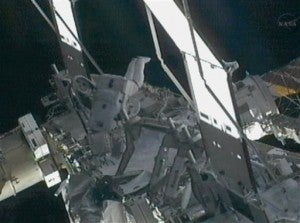 In an image made from NASA TV, space station commander Sunita Williams, center, works on a leaky radiator system outside the International Space Station on Thursday, Nov. 1, 2012, just hours after barely dodging a menacing piece of orbiting junk. AP PHOTO/NASA

The US space agency NASA ordered the space station to change position Wednesday to avoid a fragment from a communication satellite that was destroyed in a high-speed collision three years ago.

Thrusters on a docked Russian supply ship were fired to move the orbiting lab out of harm’s way. But a computer error caused the thrusters to malfunction, and the space station did not reach the desired altitude.

NASA officials said the space station and its six residents were safe despite their lower-than-intended orbit.

Space station commander Sunita Williams and Japanese astronaut Akihiko Hoshide wasted no time installing jumper cables outside their home for the past four months. Their objective was to isolate a suspect radiator to help determine whether that is the source of the ammonia coolant leak and deploy a spare radiator to bypass the troublesome section.

Engineers theorize that bits of space junk may have penetrated the radiator or part of its system; another possibility is that the 12-year-old equipment simply cracked.

The radiators are needed to dissipate heat generated by electronic equipment aboard the space station. Toxic ammonia is used as the coolant, and the spacewalkers took care to avoid contamination.

In an interview with The Associated Press earlier this week, Williams said the biggest risk is the uncertainty surrounding the leak. “We have a lot of extra procedures just in case things don’t go exactly as planned,” she said. “But we’ve dealt with ammonia before.”

A small leak was detected in this area in 2007. Spacewalking astronauts added extra ammonia last year to shore up the system, but this past summer, the leakage increased fourfold. At that rate, the affected power channel could be offline by the end of the year.

That’s why Thursday’s spacewalk was ordered up, even though it comes shortly before the departure of Williams and Hoshide. The two are scheduled to return to Earth on November 19, after a four-month mission.