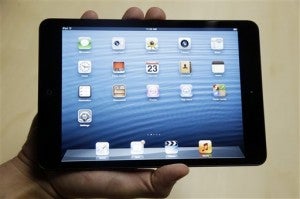 TOKYO–The iPad mini made its low-key debut Friday when sales began in Asia, as Apple hurled the latest salvo in its battle against rivals Amazon, Google and Samsung.

Around 300 people queued up outside Apple’s flagship store in Tokyo, some wearing fancy dress, to get their hands on a device the company insists is more than just a shrunken version of its popular tablet.

At least 20 people spent the night outside the shop in the upmarket Ginza area, but the launch was missing some of the pizazz of earlier offerings, with the queue quickly dissipating after an initial rush.

In tech-mad Singapore numbers were well down on previous launches while in Hong Kong, around 30 people queued to pick up their pre-ordered devices before the Apple store opened, in contrast to the hundreds who lined up for the iPad 2 last year and the 1,500 who camped out for the iPhone 4S.

It was a similar story in Sydney where the days-long queues for a new generation iPhone 5 were not repeated.

“Looks like most ordered it online,” one person in the small queue told reporters.

Nevertheless, acolytes declared themselves impressed by the physical charms of the 7.9 inch (20-centimetre) touchscreen device.

“It’s completely different (from the regular iPad),” said Ayano in Tokyo, who did not give her surname.

“It is thinner and very light. Look, you can hold it in one hand.”

Around three dozen markets in Asia and Europe, as well as the United States, were due to see launches of the Wi-Fi only version on Friday.

Prior to the launch analysts had warned the starting price of $329 might seem steep to budget-minded shoppers open to Google Nexus or Amazon Kindle tablets available for $199.

“Devotion to Apple products has been compared to a religion,” said an analyst from the US-based firm Gartner.

“But, I don’t think Apple will be as dominant in the seven-inch tablet space because they let the Kindle Fire and the Nexus get a foothold in the market at a considerably lower price.”

“This controversy reminds us of what happened with iPod mini and iPod nano,” Wu said in a note to investors.

“Both predecessors were criticised as being overpriced but went on to do much better than expected.”

Apple’s senior vice president for marketing Phil Schiller helped unveil the iPad mini last week, saying that it was an entirely new design and not “just a shrunken down iPad”.

Like later versions of the original iPad, the new Apple tablet also features rear- and front-facing cameras. It also has stereo speakers.

The launch came after British judges told Apple it had to re-write an “inaccurate” statement relating to its patent dispute with South Korean rival Samsung.

The company was told last month to post a message on its website saying Samsung’s Galaxy tablet computers had not infringed iPad designs.

But Samsung complained that the message did not comply with the court order because it included comments on other rulings in Germany and the United States which had favoured Apple.