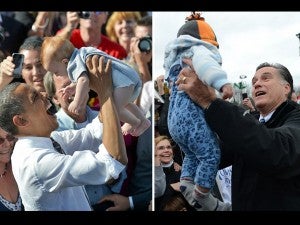 This combination of file pictures shows US Republican presidential candidate Mitt Romney (R)greets supporters while holding a supporter’s baby during a rally at Portsmouth International Airport in Newington, New hampshire, on November 3, 2012, and US President Barack Obama (L) holds a baby as he greets supporters during a campaign rally at the Cheyenne Sports Complex in Las Vegas, Nevada, on November 1, 2012. AFP

WASHINGTON – In an election filled with videos, from campaign ads to verbal gaffes from the candidates, here follows a selection of the 10 most popular aired on YouTube during the US presidential campaign:

– “Homer Votes 2012” — Homer Simpson decides to vote for Mitt Romney and gets outsourced to China in this short animation film (7.7 million views): https://www.youtube.com/watch?v=ArC7XarwnWI

– “Whedon on Romney” – Joss Whedon, director of the “The Avengers”, films a satirical video endorsing Mitt Romney as the right man for a “Zombie Apocalypse” (6.2 million views) http://www.youtube.com/watch?v=6TiXUF9xbTo

– “Original Obamaphone Lady:  — Woman in Ohio claims she is voting for Obama because he gives all minorities free phones (5.5 million views) http://www.youtube.com/watch?v=tpAOwJvTOio

– “Mitt Romney on Obama voters” – a secret recording of a Romney fundraiser during which he dismisses 47 percent of Americans as government dependents (3.22 million views) http://www.youtube.com/watch?v=XnB0NZzl5HA

– “Clint Eastwood” – speech at the Republican National Convention, made memorable for his mock conversation with an empty chair meant to represent Obama (2.4 million views) http://www.youtube.com/watch?v=yoqKdWY692k