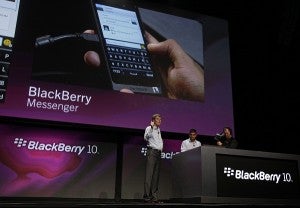 In this Sept. 25, 2012 file photo, Thorsten Heins, President and CEO of Research in Motion, gestures while talking about the messenger capabilities of the new BlackBerry 10 at the BlackBerry Jam Americas conference in San Jose, Calif. BlackBerry-maker Research In Motion, which is already struggling with plunging sales, on Thursday, Dec. 20, 2012 said it lost subscribers for the first time in the latest quarter, as the global number of BlackBerry users dipped to 79 million and the stock plunged in after hours after the company said it will change the way it shares revenue with carriers. (AP Photo/Eric Risberg, File)

TORONTO — Research In Motion’s stock plunged in after-hours trading Thursday after the BlackBerry maker said it plans to change the way it charges fees.

RIM also announced that it lost subscribers for the first time in the latest quarter, as the global number of BlackBerry users dipped to 79 million.

In a rare positive sign, the Canadian company added to its cash position during the quarter as it prepared to launch new smartphones on Jan. 30. The new devices are deemed critical to the company’s survival.

RIM’s stock initially jumped more than 8 percent in after-hours trading on that news, but then fell $1.48, or 10.4 percent, to $12.65 after RIM said on a conference call that it won’t generate as much revenue from telecommunications carriers once it releases the new BlackBerry 10 platform.

RIM is changing the way it charges service fees, putting an important source of revenue at risk. RIM CEO Thorsten Heins said only subscribers who want enhanced security will pay fees under the new system.

“Other subscribers who do not utilize such services are expected to generate less or no service revenue,” Heins said. “The mix in level of service fees revenue will change going forward and will be under pressure over the next year during this transition.”

RIM’s stock had been on a three-month rally that has seen the stock more than double from its lowest level since 2003.

But Mike Walkley, an analyst with Canaccord Genuity, said BlackBerry 10 will change RIM’s services revenue model dramatically. He said that instead of getting about $6 per device each month from carriers and users RIM could get as little as zero.

“That’s what turned the stock from being up 10 percent to being down 10 percent,” Walkley said. “That’s been part of our worry. How do they come back with a new platform and get carriers to continue to share the higher revenue —which sounds like they are not going to— and then subsidize the phone to make it affordable for consumers and enterprises.”

“People are seeing that the services revenue has a lot of risk to it now with the BlackBerry 10 migration.”

Three months ago, RIM had 80 million subscribers. Analysts said the loss of 1 million subscribers was expected. Once coveted symbols of an always-connected lifestyle, BlackBerry phones have lost their luster to Apple’s iPhone and phones that run on Google’s Android software.

RIM is banking its future on its much-delayed BlackBerry 10 platform, which is meant to offer the multimedia, Internet browsing and apps experience that customers now demand.

“We believe the company has stabilized and will turn the corner in the next year,” Heins said. He noted that the company’s cash holdings grew by $600 million in the quarter to $2.9 billion, even after the funding of all its restructuring costs. RIM previously announced 5,000 layoffs this year.

Heins said subscribers in North America showed the largest decline, but said there is growth overseas.

Colin Gillis, an analyst with BGC Financial, said before the conference call that the company bought itself more time.

“It doesn’t mean (BlackBerry) 10 will gain traction. A lot of people said 10 would be DOA, but I don’t think that’s going to be the case,” he said.

Misek also called it a positive development that RIM said there would not be another delay to BlackBerry 10.

“The success or failure of this company will be on BlackBerry 10,” Misek said.

RIM reported revenue of $2.7 billion, down 47 percent from a year ago.