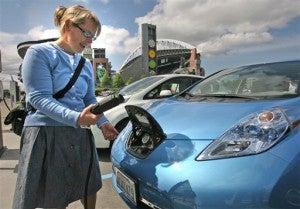 Nissan’s Leaf went on sale late last year, but the automaker is looking ahead to about five years time when aging Leaf vehicles may offer alternative business opportunities in using their lithium-ion batteries as a storage place for electricity.

Nissan Motor Corp. acknowledges that, once the Leaf catches on, a flood of used batteries could result as the life span of a battery is longer than an electric vehicle’s.

Electricity generation and storage are drawing attention in Japan after the March 11 earthquake and tsunami caused massive blackouts in the country’s northeast. A nuclear power plant that went into meltdown, Fukushima Dai-ichi, after backup generators were destroyed by the tsunami, is also renewing fears about a power crunch.

In the new charging system, demonstrated to reporters Monday, electricity is generated through 488 solar cells installed on the roof of the Nissan headquarters building in Yokohama, southwest of Tokyo.

Four batteries from the Leaf had been placed in a box in a cellar-like part of the building, and store the electricity generated from the solar cells, which is enough to fully charge 1,800 Leaf vehicles a year, according to Nissan.

Although interest is growing in renewable energy such as solar and wind power, a major challenge is the storage of electricity, which remains expensive without a breakthrough in battery technology.

Such interest is likely to keep growing in Japan because of fears about the safety of nuclear power. The Hamaoka nuclear plant is being shut down because of such concerns, and more may follow.

Other Japanese automakers, such as Toyota Motor Corp. and Honda Motor Co., are working on similar projects, such as linking hybrids with solar-equipped homes as part of energy-efficient communities called “smart grids.”

Electric vehicles produce no pollution or global-warming gases but need electricity, whose production mostly relies on polluting oil or gas.

Even after a Leaf is ready to be scrapped, its battery is likely to have 80 percent of its capacity. On the plus side, the Leaf with its high-capacity battery can store the equivalent of two days of household electricity use, Nissan said.

A joint venture with Sumitomo Corp. called 4R Energy Corp. plans to offer eletricity storage systems like the one at Nissan headquarters for business and public facilities as a commercial product by 2016.

Nissan also hopes to start selling such storage systems for regular homes by the fiscal year starting in April 2012. It will carry out field tests from December, 4R Energy President Takashi Sakagami said.