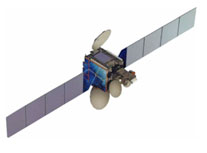 MANILA, Philippines—The private sector must now take the lead in restoring the Philippines’ presence in space.

The government is beset by economic, national security and other concerns that limit its ability to spearhead the lofting of a new Philippine satellite that will assist in the expansion of national services beyond our crowded metropolitan regions and help sustain the high economic growth we are experiencing.

Growth at this level can be stymied without the critical infrastructure satellite communications can provide.

By its immunity from terrestrial disasters such as typhoons, a satellite can enhance long-distance communications and expand wireless broadband Internet coverage across our entire archipelago.

National security, disaster preparedness and distance learning are just a few of the many benefits a satellite orbiting serenely in space will support.

For businesses, a satellite enhances the point-to-multipoint communications that can boost sales and cut costs. It also expands broadband access to the Internet, which is undoubtedly the home page of 21st century business. A satellite allows companies to have national presence from the first day of service without the costly terrestrial infrastructure that accompanies cellular and cabled services.

Current business, national security and national development issues make it essential that the Philippines have its own dedicated space communications satellite to replace Agila-2, formerly the country’s only satellite that now orbits the Earth over the Middle East as ABS-3.

The loss of our only Philippine satellite was a severe blow to the country’s technological independence. It means that we continue to depend on satellites of competitor states for strategic business and military telecommunications.

Even worse is to not do anything about the loss of our own satellite in a digital age where technology multiplies national strength. This inaction will only serve to hold future Filipinos hostage to the whims of other nations.

The Philippines is the only country among the top five richest Southeast Asian states without its own communications satellite. That must change.

Indonesia has nine satellites; Malaysia has four; Singapore, nine; and Thailand, five. Even Vietnam now has its own satellites. In May 2012, Vietnam orbited Vinasat 2, its second satellite.

The business and security issues facing the Philippines today present both greater opportunities and greater threats that can successfully be addressed by a satellite dedicated to the Philippines’ unique interests.

At the business end, a Philippine satellite can help provide the massive bandwidth required by mobile devices such as smartphones, tablet computers and laptops for high-speed, broadband Internet on demand, anytime, anywhere.

“Satellites can help return the Philippines to where it was more than 40 years ago when it was at the head of Asia, using technology to facilitate nationwide economic development and security, and not at the back of Asia,” said Tom van der Heyden, an American national and a leading satellite communications expert.

He believes a satellite catering to the Philippine market will make money and that pent-up demand will drive growth. The reach of a single satellite is far more extensive than what any terrestrial network can achieve.

Van der Heyden said a medium-sized satellite should be able to find clients for its on-board transponders in about three to four years based on the rapid demand for Internet and other nationwide communication requirements.

“The demand is high and the market huge, and this can sustain a number of Philippine satellites,” believes Van der Heyden, who has made the Philippines his second home for the last 10 years.

Globally, the Internet relies on satellites for “backhaul” or the link between a core network such as a telecommunications provider or a broadcast network to the small sub-networks that distribute content. The point-to-multipoint capability of a satellite makes backhaul via satellite cheaper and more reliable than terrestrial telecommunications.

What exists here is an expensive but vulnerable network of terrestrial cellular and fixed broadband base stations that rely on fiber optic cables to distribute content throughout the archipelago. The result is very expensive Internet and slow download speeds.

The dearth of broadband capacity is also the reason for the popularity of WiMax or the Worldwide Interoperability for Microwave Access. WiMax is a technology that provides wireless broadband access to a wider area covering several kilometers.

WiMax is gaining traction because it’s an economical solution to the “last mile problem” that makes current Internet technologies such as 3G so expensive. Despite this, WiMax can only reach out to a few kilometers as against a satellite that can provide wireless broadband service to subscribers in an area hundreds of kilometers in size.

A satellite is ideal for bringing broadband to the last mile of residences and businesses, thereby lowering Internet costs. Satellite networks are also extremely predictable compared to terrestrial Internet Protocol networks that are a mix of different networks. This means satellite networks can deliver a constant and uniform quality of service to thousands of locations, irrespective of geography.

If Europe and North America continue to build and launch satellites focused on Internet service, then there should be no question of a satellite’s value to an archipelago that has limited terrestrial infrastructure to cover its 7,000 islands.

When the Philippines started thinking satellites in the 1990s, the Department of Transportation and Communications spearheaded the formation of a consortium of telecom companies that invested millions of pesos to launch Agila since a single company was unable to raise the $300 to $400 million needed to launch the satellite.

We need incentives of this sort today to enable a consortium to launch a new Philippine satellite. Van der Heyden suggested that the government could provide enough incentives and tax breaks to encourage investors in the satellite business.

The government can also help by guaranteeing its own capacity requirements on the new satellite. This capacity can be used for secure government communications, especially those made by the Armed Forces of the Philippines, and by commercial, business, banking, remote education and disaster recovery efforts.

Van der Heyden believes a firm government commitment to lease transponders could generate enough funding to launch a minimum of one or likely two satellites.

And if the private Filipino consortium wants to cut costs further, it can opt not to build a new satellite but instead partner with foreign business firms to buy a small satellite.

This will allow the partners to split costs and do commercial deals. The aim is to generate a faster return on investment by leasing transponders faster while reserving capacity for Philippine government needs.

A satellite transponder is a device that receives a radio signal and automatically transmits a different signal, often without changing the content of the received signal. Communications satellites earn money through transponder leasing.

Former MSC President Garie Pimentel, who is now an ABS executive, said the Southeast Asian satellite market is very competitive. The rising number of countries in Asia orbiting their own national satellites has resulted in overcapacity.

He said the new trends lean toward “hosted payloads,” “condo-sats” and other joint ventures. It is not essential that a country own a satellite if it cannot afford one.

This country cannot and should never rely on Indonesia or Malaysia, and especially China, to handle or control its military communications for obvious national security reasons.

The primordial business need to seize competitive advantages is bound to drive Filipino businessmen, especially those involved in information and communications technology, to once again consider the profitable opportunities that accrue from operating their own commercial satellite.

Now is the time to do so.

(Art Villasanta and Peter Galace have been writing about satellites and the space industry for a decade. They co-authored a market study on Philippine telecommunications for an international research firm.)