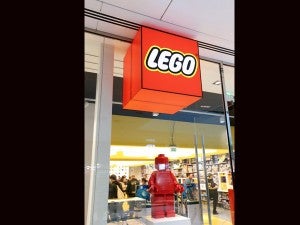 A picture taken on October 18, 2012, shows the logo of Danish construction toys group Lego in the newly-opened store at the “So Ouest” shopping center in Levallois-Perret, west of Paris. AFP/THOMAS SAMSON

LAS VEGAS – Lego bricks are getting cozy with the isPhone and other Apple devices in the latest incarnation of the Mindstorms robotics kit.

Lego is set to announce Monday that a new, $350 Mindstorms EV3 kit will have the ability to talk to iPhones, iPads and iPod Touches through Bluetooth wireless connections. That means Lego builders can use the devices as remote controls for their robots, or create simple programs that are then sent to the robots to control their actions.

Lego said the kit will go on sale in the second half of the year.

Remote control was already possible with Android smartphones and the most recent Mindstorms kit, the NXT. Apple devices didn’t work because the kit lacked a chip that would identify the Lego gadget to Apple devices.