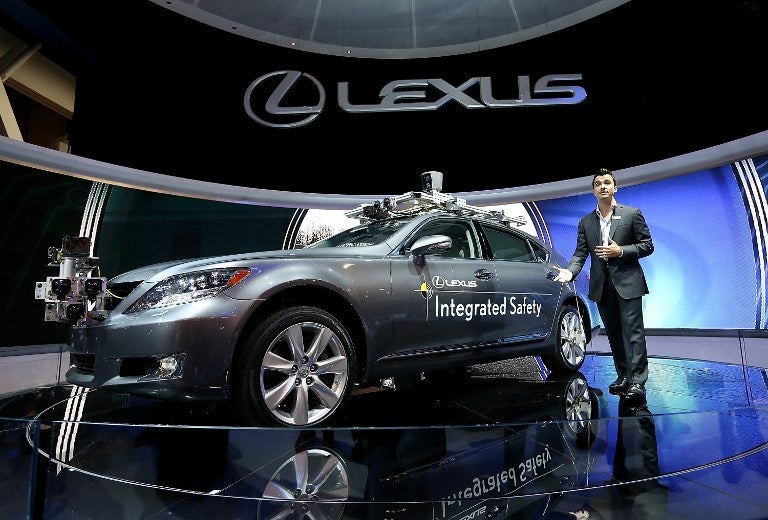 A Lexus LS Integrated Safety self-driving car is displayed at the Lexus booth during the 2013 International CES at the Las Vegas Convention Center on Jan. 8, 2013, in Las Vegas, Nevada. JUSTIN SULLIVAN/GETTY IMAGES/AFP

LAS VEGAS –Automakers and technology firms are jumping on the bandwagon of the driverless car, which remains a concept as well as a platform for new technologies to improve safety on the road.

At the Consumer Electronics Show in Las Vegas this week, Toyota and Audi showed off their ideas for autonomous vehicles, in the wake of the push by Google on its driverless car. And others may follow suit.

Toyota drew considerable attention with its electronically gussied-up Lexus sedan, equipped with a host of sensors and cameras that can detect what is around the vehicle.

“It has the ability to drive itself, but we won’t allow it,” said Jim Pisz, corporate manager at Toyota North America.

Pisz said the technology is similar to Google’s with the use of electronics, but that “the Google focus is on software mapping, that’s what they’re really good at. Toyota focuses on safety programs and more integrated programs.”

The Japanese automaker maintains that its 2013 Lexus LS, also being shown at the expo, already has “the world’s most advanced pre-collision safety system” but its driverless cars are only being used in closed research centers, unlike Google’s publicized road tours.

The growing use of advanced electronics for auto safety, communications and entertainment has prompted a record eight automakers to attend the Las Vegas show, along with dozens of firms working on related products and services.

The German automaker’s Ulrich Hofmann told AFP that the new technology “helps the driver in situations where it’s boring to drive, and leaves you to drive when it is fun.”

At the Las Vegas tech confab, Audi showed its concept for a driverless vehicle in a simulator.

Hofmann said an autonomous car could be developed within five to eight years but noted that “there are a lot of regulatory and legal issues.”

The concert “seemed so far out, it didn’t make sense having big teams working on it,” he said, but added that “now, with the interest in the Google car, politicians are starting to speak about it” and Ford has resumed its program.

Nevertheless, “a full autonomous car is far out, and may even never exist,” van der Jagt said.

Audi engineers say they can envision an on-off switch which could be used in traffic jams on highways, where vehicles could join a sort of motorcade traveling at identical speeds, freeing a driver for a few moments.

In September, California Governor Jerry Brown signed a bill clearing the way for self-driving cars to jockey with human-operated vehicles to test the technology on the state’s roads.

The state of Nevada in May issued a license plate giving Google’s self-driving car the green light to travel along public roads there.

The growing talk of autonomous cars has sparked fresh interest in how the tech sector—which has been under fire for fueling “distracted driving—can improve auto safety and the driving experience.

“Everybody gets distracted at some point,” said Steven Wenger of Mobileye, a company that makes equipment for crash avoidance for major automakers and as a consumer aftermarket device.

“Three seconds could save a person’s life. We want people to be aware of these technologies which can help avoid accidents.”

TOPICS: auto, CES, Electronics, IT, motoring, US
Read Next
Smart TVs get smarter, by just a little bit
EDITORS' PICK
Even without corruption, Manila Bay rehab is not OK during pandemic – Robredo
KZ Tandingan taking it one step at a time
Water remains our saving grace right now
The power of two: Renewable energy and natural gas are the cleaner, better combination
Palace rejects clamor to postpone 2022 elections
Has Duterte done any good? Robredo says yes, but he missed out on many things
MOST READ
Robin Padilla, Mariel Rodriguez, family members contract the flu
DepEd disowns self-learning module using ‘dirty names’
DENR probes mining firms in Manila Bay white sand project
Ex-Speaker Alvarez joining opposition? That would be difficult, Robredo says
Don't miss out on the latest news and information.