Science seeks ways to take sting out of sunburn 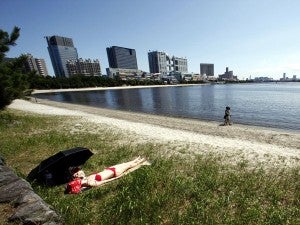 Most important advise: "Don't get a sunburn." (AP Photo/Shizuo Kambayashi)

WASHINGTON — If you have been to the the beach, chances are you have experienced an unfortunate rite of summer: The sunburn. Skin so swollen it hurts to bend. The heat that rises from reddened shoulders. The “ow, ow, ow” from the shower after you thought the pain had faded.

For all the creams that promise to soothe, there aren’t super treatments for a sunburn. Dermatologists say the best bet: Some of the same pills you pop for a headache — like the ibuprofen found in Motrin and Advil, or naproxen brands such as Aleve.

If that sounds too simple, well, scientists don’t know exactly what causes this kind of touch-sensitive pain. But research is getting them closer to some answers.

British scientists found a clue in some healthy people who volunteered to be sunburned for science. Don’t worry — they controlled the beams of ultraviolet light so that only a small patch of the volunteers’ arms got a medium burn, just enough for a unique kind of testing.

One reason sunburns are so common is that by the time you see pink and head indoors, more damage already is brewing. Unlike an immediate burn from, say, touching a hot stove, a sunburn’s pain is delayed as the red darkens over the next 24 to 48 hours.

Researchers from Kings College London tracked how their volunteers’ sunburned skin became more sensitive. At the peak of pain, they cut away a small bit of damaged skin to analyze all the biochemical changes inside — and found a protein that’s responsible for triggering the cascade of pain and redness.

The protein summons inflammation-causing immune cells to the damaged spot as sunburned skin cells die off. Its activity increased more than did other pain-related chemicals as the sunburn worsened, the researchers reported last week the journal Science Translational Medicine.

It took further experiments with rats to show the molecule, named CXCL5, was a key culprit. Most intriguing, injecting rats’ sunburned feet with a substance that tamped down the protein also tamped down the pain, a finding that might lead to new medications. The researchers will next study whether the protein plays a role in more long-lasting types of pain.

What about today’s sunburns? About a third of adults get one each year, and two-thirds of them have more than one, according to the Centers for Disease Control and Prevention. That is a bigger problem than pain — sunburns are believed to increase risk of the most serious type of skin cancer, melanoma. There aren’t good figures on how often children get sunburned, but their tender skin can burn especially easily.

While water and sand reflect UV rays to increase exposure, it is not just the beachgoer who is at risk. A sunburn can sneak up on anyone, from the kids playing ball and their watching families to the afternoon gardener.

First-degree sunburns tend to peel in a few days. But more severe second-degree burns can blister and even require a doctor’s care, especially if they cover large areas or come with fever and chills, says Dr. Roger Ceilley of the American Academy of Dermatology and the University of Iowa. A bad burn hinders how well your body cools itself, so it’s important to cool down and keep hydrated.

To self-treat the pain, take ibuprofen or similar over-the-counter painkillers known as NSAIDs within a few hours of reddening skin, Ceilley advises. Those pills fight various kinds of inflammation. While they may not directly block the pain-causing protein the British researchers discovered, they do act on related pain chemicals, he notes.

But do not use those pills before going in the sun; they are among a host of medicines that can make your skin more sun-sensitive.

Cool compresses can soothe, and some patients find relief from aloe. But “you don’t want to put a lot of heavy ointments on,” Ceilley cautions. They can trap in heat.

But more important, “Don’t get a sunburn,” Feldman stresses. The advice:

—When you are out, wear sun-protective clothing and seek shade such as beach umbrellas. Feldman likes to tell of the dermatologists’ convention in Hawaii where beachgoers wore long-sleeved swim cover-ups and big hats.

—Don’t forget the sunscreen, especially on the face, hands and arms that are exposed to sun just about every day.

Sunscreen isn’t a substitute for the first two tips, Feldman warns, because it doesn’t guarantee protection if you stay out too long, use too little or miss a spot.

Still, picking a sunscreen should get less confusing next summer when new government regulations kick in. Those rules will prohibit claims like “waterproof” — you do need to reapply after swimming or sweating — and will assure protection against both types of skin-damaging UV rays.