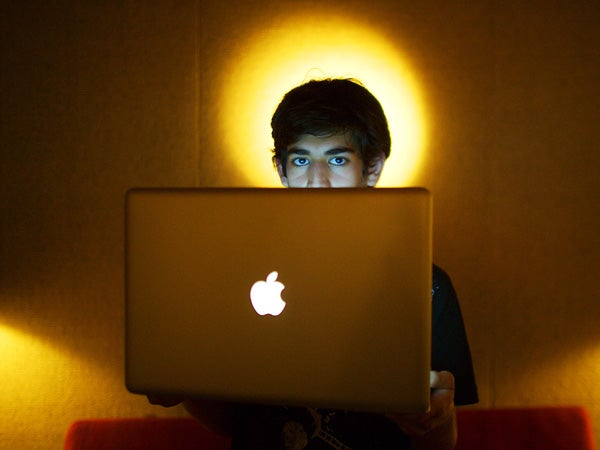 NEW YORK— A co-founder of the social news website Reddit and activist who fought to make online content free to the public has been found dead, authorities confirmed Saturday, prompting an outpouring of grief from prominent voices on the intersection of free speech and the Web.

Aaron Swartz, 26, hanged himself in his Brooklyn apartment weeks before he was to go on trial on accusations that he stole millions of journal articles from an electronic archive in an attempt to make them freely available.

Swartz was a prodigy who as a young teenager helped create RSS, a family of Web feed formats used to gather updates from blogs, news headlines, audio and video for users. He later co-founded Reddit, which ended up being sold to Conde Nast, as well as the political action group Demand Progress, which campaigns against Internet censorship.

In 2011, he was arrested in Boston and charged with stealing millions of articles from a computer archive at the Massachusetts Institute of Technology, Prosecutors said he broke into a computer wiring closet on campus and used his laptop for the downloads.

Swartz pleaded not guilty to charges including wire fraud. His federal trial was to begin next month. If convicted, he faced decades in prison and a fortune in fines.

Some legal experts considered the case unfounded, saying that MIT allows guests access to the articles and Swartz, a fellow at Harvard’s Safra Center for Ethics, was a guest.

According to a federal indictment, Swartz stole the documents from JSTOR, a subscription service used by MIT that offers digitized copies of articles from academic journals. Prosecutors said he intended to distribute the articles on file-sharing websites.

JSTOR did not press charges once it reclaimed the articles from Swartz.

The prosecution “makes no sense,” Demand Progress Executive Director David Segar said in a statement at the time. “It’s like trying to put someone in jail for allegedly checking too many books out of the library.”

Criticizing the government’s actions in seeking to prosecute Swartz, Harvard law professor and Safra Center faculty director Lawrence Lessig called himself a friend of Swartz’s and wrote Saturday that “we need a better sense of justice. … The question this government needs to answer is why it was so necessary that Aaron Swartz be labeled a ‘felon.'”

Among Internet gurus, Swartz was considered a pioneer of efforts to make online information freely available.

Swartz aided Malamud’s effort to post federal court documents for free online, rather than the few cents per page that the government charges through its electronic archive, PACER. In 2008, The New York Times reported, Swartz wrote a program to legally download the files using free access via public libraries. About 20 percent of all the court papers were made available until the government shut down the library access.