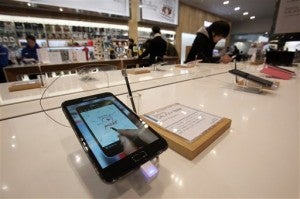 Samsung Electronics’ Galaxy Note II is displayed at the showroom of the company’s headquarters in Seoul, South Korea, Friday, Jan. 25, 2013. Samsung Electronics Co. said quarterly profit soared 76 percent, boosted by the popularity of its Galaxy smartphones, which outsold the iPhone for a fourth straight quarter. But the company said Friday it expects earnings to decline during the current quarter because of seasonally low demand for consumer electronics. AP

NEW YORK— The launch of the iPhone 5 and the declining popularity of non-smartphones have made Apple the biggest seller of phones in the U.S. for the first time, research firm Strategy Analytics said Friday.

The firm estimates that Apple shipped 17.7 million iPhones of all kinds to U.S. buyers in the October to December period, meaning it accounted for one in three new phones.

Samsung Electronics of Korea was close behind, shipping 16.8 million phones, including non-smart ones. Samsung has been the largest seller of phones to the U.S. market since 2008, Strategy Analytics said.

NPD Group, another research firm, found that Samsung phones still outsold the iPhone in the quarter, by 31 percent to 29 percent. It tracks retails sales while Strategy Analytics tracks shipments, so the numbers are not directly comparable.

Samsung beats Apple globally even when only smartphones are considered. It shipped 63.7 million units worldwide versus Apple’s 47.8 million.

IPhones are more expensive than most Samsung smartphones. They’re well within reach for U.S. buyers, but not for buyers in the developing world, where cheaper phones running Google Inc.’s Android operating system dominate.

In the U.S., iPhone sales are usually very strong in the first few months after a new model is released. They then taper off. That means Samsung could regain the phone crown as early as this quarter, as measured by Strategy Analytics.

NPD said the iPhone 5 was the single most popular phone in the U.S. in the holiday quarter. The Samsung Galaxy S III was No. 2, followed by the older iPhone models, the 4S and 4.