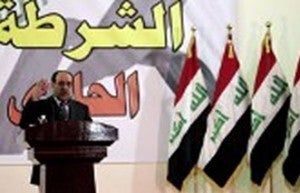 BAGHDAD—Hackers attacked the official website of Iraqi Prime Minister Nuri al-Maliki on Saturday, posting a message critical of the leader who has faced weeks of protests demanding he quit.

The message, posted by a group calling themselves “Team Kuwait Hackers”, described Maliki as a “tyrant” and warned him that he would end up like Syrian President Bashar al-Assad, who has been grappling with a 22-month uprising.

“You want to be Bashar al-Assad?” read the message, which was accompanied by a picture of a two women wearing the abaya, or full-length female black robe, who were crying. “Bashar is over, and victory is near, God willing.”

“God help the people of Iraq against the tyrant’s regime.”

The message also referred to Maliki as “Haliki”, a play on the Arabic word for deceased.

It was the second time that Maliki’s website has been hacked into in as many weeks.

A week ago, officials in his office took down the website and posted a message saying it was undergoing maintenance, and denying any attack at the time.

“We are trying to fix it now,” said Ali al-Mussawi, the premier’s spokesman. “The problem is not about removing it, but about how to protect the website in the future.”

Maliki is mired in a political crisis that has pitted him against many of his erstwhile government partners less than three months ahead of provincial elections.

The discord comes amid weeks of demonstrations in Iraq’s majority-Sunni north and west originally railing against the targeting of their community by the Shiite-led authorities but have increasingly called for the premier to go.