Love in time of social networking 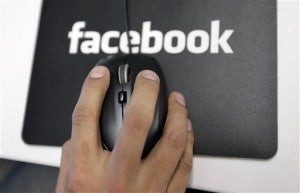 It’s a new era for dating, where chocolates and roses have been replaced by “likes” and Instagram pictures, and your relationship status can change with a click of a button. AP PHOTO/PAUL SAKUMA

Kitty, a preschool teacher, thought she had found the love of her life when she met Bong.

“We dated regularly for a few months. He said we were exclusive so I changed my Facebook status to ‘In a relationship.’ His status stayed `Single’ and he refused to change it. We broke up. If he wasn’t going to be truthful about our relationship on Facebook, how can he be truthful about it in real life?” Kitty said.

Welcome to love and courtship in the time of social networking. It’s a new era for dating, where chocolates and roses have been replaced by “likes” and Instagram pictures, and your relationship status can change with a click of a button.

“That relationship status feature of Facebook is evil,” said Carmela, a writer. “I’ve seen angry friends change theirs to `It’s complicated’ every time they fight with their boyfriends. Then friends flood their pages with questions: `Why?’ `What happened?’ `What did he do?’ It’s so messy.”

Princess Dasky, a PR manager, agreed. “I’ve decided that I will never change my dating status in Facebook or anywhere online, except maybe if I’m changing it to `engaged’ or `married.”’

Social networking sites have become a necessary tool for this generation of daters, offering a venue for low-risk and convenient courtship.

Background checks are now easier too. Char, an account supervisor in a marketing communication company, said, “By adding him on Facebook, you see your common friends and you can text or call them right away.”

Bernard, a copywriter, said, “Job companies you apply for do it—why not on someone you potentially will spend the rest of your life with?”

It was also through Facebook that Melanie, a PR executive, reconnected with her childhood sweetheart after 10 years of not seeing each other.

They used to exchange handwritten letters when they were in high school. Now, they are back together and use Facebook, Twitter and Instagram to keep in touch, especially since they both travel a lot for work.

“Communication has been easier, checking up on each other can be done in an instant,” she said.

Princess Dasky said: “I’m in a long-distance relationship now. Six to eight years ago, this might not have worked for me. But social networking sites are a great way to continue to get to know each other. It’s a great way to introduce him to my family and friends too.”

Neil, a senior art director, said social networking sites were a big help when he was living in Toronto and his girlfriend was in Vancouver.

“Social media is an excellent venue to know whether your partner is having a bad day at work, the food she is craving, and how she feels in general, depending on how much she shares on her page.” The two are now married. “I eventually moved to Vancouver and lived happily ever after,” Neil said.

But not all stories end happily. Joseph, a human resources business partner, said, “Facebook can make or break relationships so use it responsibly.”

TriggerFinger, a photographer, felt the same way. “Social networking sites can both be a blessing and a bane. They can amplify issues from the past that should not be remembered.”

Jellybean, a case manager, said: “If one of you is a jealous person, these sites can make a relationship difficult. My husband and I don’t really use them to declare love for each other or have online fights. We think that some aspects of our relationship should stay private.”

Isabel, an ER nurse, said the convenience of social networks could be dangerous.

“You have a constant access to their daily lives and their interactions, whether you like it or not. In the thick of being in love, your insatiable urge to know about your partner will use this. You want to know what they’re doing, who they’re interacting with, what they’re thinking about. This can cause friction in relationships. Couples, my past relationships included, have had so many fights that were brought on by very petty things on the Internet,” Isabel said.

Other couples have decided to deal with this by staying away from each other’s social networks.

Isabel said: “The guy I’m dating is in a band. A lot of girls try to flirt with him on Facebook and he will always be tempted to flirt with them. We fought about it once. I’ve decided to unsubscribe from him. It’s the best decision I made online.”

Alta, a plus-sized model, said she and her boyfriend were no longer friends on Facebook. “Now we have less arguments. We just use iMessage and Viber.”

Cerise, a marketing consultant, believed that social networking sites also made it easier for partners to cheat. “Because these sites make hooking up easier, cheating is easier too.”

But the very same sites make catching infidelity easier too. Gorgeousgal said, “People have been using Facebook to find proof and to investigate, especially when you get that not-so-nice feeling that your partner might be playing or fooling around.”

In the event that relationships fall apart, social networking sites still play a role. In some cases, breakups even happen online.

“Once you change your relationship status, practically the whole world will know of it,” said Patrick, a writer.

“You will get flooded with messages and it’s harder to deal with the breakup while everyone is giving their two cents—even if you don’t want it,” said Bunny.

CS, a marketing manager, said, “You’ll be bombarded with information you don’t need to know. I think when you break up with someone and it’s a very painful one, a smart move would be to delist or unfriend because it helps in giving you a clean break.”

Xan, an educator and entrepreneur said, “All breakups are painful but I think social media amplifies things—even the hurt is magnified, if you say it on Facebook.”

“I’ve seen people break up on MySpace and Facebook and they just get mean and nasty with each other and each other’s friends. And yet, I have known friends who end relationships, and it stays out of these networks. I think it depends on the level of maturity of the people involved,” said Lilly, an academic researcher.

Moving on can become more difficult, too, because Facebook and Twitter make it easy to see what people’s ex-boyfriends and girlfriends are up to. “I think the amount of times you spend checking your ex’s profile can tell you how far you’ve moved on.” said Janis Ian, an editor.

Some save themselves from the trouble by resisting the urge. Random Perignon, a graduate student, said, “I don’t stalk exes because I don’t want to commit emotional suicide.”

B, president of a tourism company, said: “I have blocked ex-boyfriends from finding me on any social media offering a ‘block’ option. Who wants that kind of drama?”

Although they are adept at hi-tech dating, a lot of people claim they miss old-fashioned romance—handwritten notes, flowers, chocolates, surprises, the whole shebang.

“I must agree, that the occasional post-it note and random presents are worth more pogi points than any wall post,” Neil said.

Cerise said she missed talking on the phone for hours. “It’s still better than chatting!”

CS said: “I miss the uncertainty of old-fashioned romance! Mas kilig kapag wala kang clue eh. It was more challenging. There was obviously more effort, and you tend to take care of it better because there is more at stake.”

Isabel said she also missed the mystery and the chance encounters.

Random Perignon added: “I think social networking has taken the thrill out of getting to know someone. There’s still nothing like finding out things for yourself rather than reading it in the person’s page.”

“I guess that’s why we’re all suckers for cheesy movies. It’s those small things that we miss, now that we prefer convenience over effort,” said Bunny.

The key is balance—finding a way to use social networks to keep love alive both online and offline. Jonha, a community manager, says, “Tagging someone you love on a Facebook status isn’t as powerful or as sweet as actually spending time with them in person.”

Neil said, “I’m the type of guy who would send flowers to her office in the same way I would randomly tweet about how much I love her just so people could tease her the whole day.”

Ruth, a writer, said: “I still get flowers and chocolates on important dates. I get to brag about it on Facebook minutes after receiving it. That, to me, is awesome.”