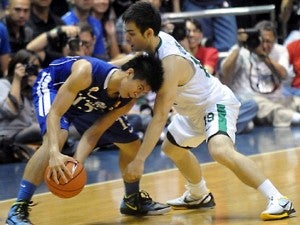 Kiefer Ravena of Ateneo and Simon Atkins of La Salle square off at the 74th season of the men’s UAAP basketball tournament Saturday, July 16, 2011, at the Araneta Coliseum in Quezon City. Ravena unloaded 24 points to pace the Eagles who won the game against the Archers, 81-72. AUGUST DELA CRUZ/INQUIRER

His exceptional performance at the 74th season of the UAAP men’s basketball tournament Saturday against their archrivals, La Salle, announced to all at the Araneta Coliseum in Quezon City and beyond that this Eagle has come to play.

And in this age of the Internet, Ravena’s outstanding court exploits were feted on Twitter where he was the number one trending topic worldwide for most of Saturday afternoon, surpassing even Jennifer Lopez and husband, Marc Anthony.

“Ladies and gentlemen, presenting, the Kiefer Ravena show,” which was posted @carambs.

“Ang galing ni ‘BLUE MAMBA’ Kiefer Ravena!” said @nahyumang, comparing Ravena to Los Angeles Lakers Kobe Byrant, who is known as the “Black Mamba.”
And even fans from La Salle were all praises for the collegiate rookie:

“I’ve always been a Green Archer fan… but this Blue Eagle Kiefer Ravena is the bomb…. :) so A’teneo it is!” said @kat_is_tough.

“His basketball IQ is a gift from God,” said @katboado.

“Congrats ADMU. Just too much of Kiefer Ravena in the first half. Maybe if he remained scoreless in this game, we could’ve won the match,” shared @dae_sarmiento.

“Every person here is focusing their eyes to Kiefer Ravena even Lasallians cheer for him,” said @iAMallanaLM.

Those who didn’t know Ravena were forced to search him in Google while others thought he was one of the characters of “Harry Potter,” being ranked along some of the movie’s characters on Twitter:

Of course, no one can be prouder than the Ateneans themselves:

“Kiefer Ravena and Ateneo are trending. I am so proud,” said @LightYoFireSeop.

As for Ravena, all this new found popularity after a forgettable performance against Adamson University last week is all part of the game.

And now that even the world is watching, Ravena says he’s ready.