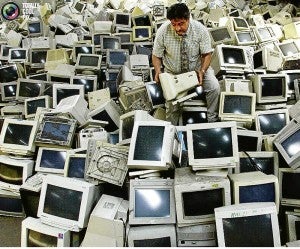 The accelerating rate of replacement of electronic and technological products has resulted in a serious problem that is growing in magnitude—the proliferation of electronic waste worldwide. PHOTO FROM TOTALLY COOL PIX.COM

MANILA, Philippines—By the time you get your hands on the newest phone model you’ve always wanted, a faster, smaller and perhaps even cheaper version comes out of the pipeline.

Such is the blistering pace of today’s advances in technology that any product becomes obsolete in a matter of months.

The accelerating rate of replacement, however, has resulted in a serious problem that is growing in magnitude—the proliferation of electronic waste worldwide.

According to data from the International Environmental Technology Center of the United Nations Environment Program, an estimated 50 million tons of e-waste are produced every year.

In a briefing in Pattaya, Thailand, organized by Fuji Xerox, UNEP Asia Pacific regional director Dr. Park Young-Woo said that the volume of e-waste is increasing by a massive 40 percent a year worldwide, equivalent to about 15 tons a year, about 80 percent of which end up in landfills and incinerators.

According to UNEP, e-waste is the fastest-growing type of waste, particularly in some developing countries where the volume is expected to grow by up to 500 percent over the next decade.

Dr. Park said about half of the current annual volume is coming from Asia Pacific because of the growing population as well as affluence of citizens, which means greater demand for the latest mobile phones, refrigerators, television sets, tablets and office equipment.

The growing volume of e-waste is a cause for great concern because it contains hazardous materials such as lead, mercury, arsenic, cadmium, selenium and hexavalent chromium that pose a serious threat to human health.

Park, who is also a representative of the UNEP Regional Office for Asia and the Pacific, said one way to win the war against electronic waste is to promote recycling, as many of the components—such as plastics, paper, glass, rubber, copper, and aluminum—can be either reused or recycled.

UNEP data show that a ton of used mobile phones, for example, yield $15,000 worth of precious metals such as gold.

Recycling has its social and economic benefits as seen by companies such as Fuji Xerox that have embraced the 3 Rs—reduce, reuse, recycle—as part of their corporate strategy.

Fuji Xerox, one of the world’s largest manufacturers and distributors of office equipment, was actually way ahead of the curve as it established a company-wide produce recycle policy as early as 1995, years before environmental protection and climate change became part of the global consciousness.

This was borne out of the company’s belief that it is responsible for what happens to the office equipment at the end of their useful life.

Thus, through the years, the company was able to perfect the technology of reusing office equipment components in the manufacturing of new products.

Components that cannot be used in the remanufacturing process, on the other hand, are collected by recycling companies in keeping with the company’s zero-landfill policy, according to Yoshihiro Sasaki, general manager of the Global Recycling System of Fuji Xerox Co. Ltd.

Park is confident that as more companies promote corporate-wide recycling, such as what Fuji Xerox is doing, the adverse environmental impact of e-waste will be greatly reduced.