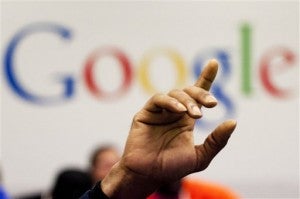 Google predicts that between 2012 and 2015, 500 million new users from emerging markets—including the Philippines—will go online, and they represent a potential market for all companies online. AP FILE PHOTO

MANILA, Philippines—Amid the stricter regulation of online campaign advertisements, the newly opened Philippine office of the search giant Google this week sought to educate legislators running for various posts on how to use social media to reach a wider audience.

Over a hundred campaign managers and other staff of senators and congressmen running for office this May attended a seminar on social media hosted by Google Philippines this week, the Silicon Valley giant said in a statement.

“We want to help our public servants learn how to reach the Filipino people through the Internet by understanding the digital landscape in the Philippines and the online behavior of Filipinos,” Google Philippines country manager Narciso Reyes said in a statement.

“Filipinos are very technologically savvy. They are constantly online. And the better way to engage with Pinoys about issues that concern them is to meet them where they are—online, whether on their laptops or mobile phones,” he added.

Google emphasized the advantage of using online tools in reaching the 33 million Filipinos connected to the Internet. This represents about a third of the country’s total population.

The company said more and more Filipinos would likely start using the Internet this year due to the popularity of Internet-enabled smartphones, which are starting to become more affordable.

Google said the Internet has started become the most potent way of getting messages to the public.

Citing data from the Association for Data-driven Marketing & Advertising (ADMA), Google said mobile penetration in the Philippines reached 111 percent at the end of 2012. This means that there are more mobile phones in the country than people—indicating that a significant portion of users had multiple subscriptions.

The company added that in a study by online research firms Decision Fuel and InMobi, Filipinos were found to spend 54 percent of their time online on their laptops and mobile phones. This was more than that spent watching television (27 percent), listening to the radio (13 percent) and reading newspapers (6 percent) combined.

Google said 110 representatives from different senators and congressman attended the seminar held on Wednesday. The seminar focused on how Google Search, Google+ Hangouts, and YouTube could be used to engage better with the people and allow them to interact with government officials, and actively participate in “nation building.”

In the same statement, incumbent Senator Pia Cayetano, nearly halfway through her current six-year term, said the use of the Internet would help make the government more transparent and public servants more accessible to ordinary citizens.

“As a public servant, I want to make sure that I am accessible to the people, and at the same time get feedback from them, especially those who spend a lot of time on social networks,” said Cayetano, who maintains a website, blog, Facebook page, YouTube channel, and a Twitter account.

“I believe that creating a presence on the Internet will not only help us get closer to our constituencies and interact with them, it will also help them become educated about our programs,” she said.