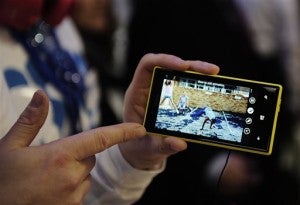 BARCELONA, Spain—Nokia, once the leader of the mobile phone world, unveiled Monday two new Windows Phone-based Lumia smartphones aimed at the cheaper end of the market.

The Finnish group revealed the Nokia Lumia 720 and Nokia Lumia 520 on the opening day of the world’s biggest mobile fair, the Mobile World Congress, in Barcelona, Spain.

“The launches today reflect our commitment to broadening our devices and services portfolio to meet the demands of people and businesses around the globe.”

The Nokia Lumia 720 has a camera with Carl Zeiss optics and has a starting price of 249 euros ($330) before taxes, with a rollout due to start in Hong Kong, Vietnam and Singapore in the first quarter.

The Nokia Lumia 520 would be priced at just 139 euros pre-tax, it said, the cheapest of its Windows Phone 8 devices, launching first in Hong Kong and Vietnam in the first quarter of this year before a broader release in the second quarter.

Nokia said it would bring the Lumia 720 and the Lumia 520 to China.

Last month, Nokia posted a net profit of 202 million euros in the fourth quarter, its first quarterly profit for 18 months.

But the beleaguered company, which is trying to cut costs, said that it would not pay a dividend to shareholders for the first time in more than 20 years.

In the three months ending December 31, Nokia made a net profit of 202 million euros compared to a loss of 1.07 billion euros in the same quarter a year ago.

The company sold a total of 86.3 million devices during the quarter, including 4.4 million Lumia smartphones, its new flagship product developed with Microsoft.

Nokia said at the time that the numbers were better than expected.

Still, net sales of smart devices fell 55 percent in the quarter to 1.2 billion euros on a yearly basis as volumes fell.