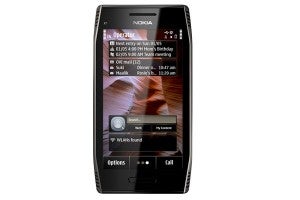 A cursory look at the Nokia X7 shows a metallic silver frame and futuristic angular design that may seem like a byproduct of the Apollo 13 spacecraft.

Built with a combination of stainless steel and glass, the Nokia X7 comes off as one among the many serious executive smartphones out in the market today.

But once you get hold of it, the Nokia X7’s features will reveal a rather entertainment-focused device—from the four-inch amoled touchscreen with 640×360-pixel resolution, perfect for gaming, to an 8-megapixel full focus camera that also offers 720p video recording and dual LED flash.

Add to that, the Nokia X7 already comes with the Galaxy on Fire HD and Asphalt 5 HD games.

As with the older models of Nokia, the X7 continues to present itself as a user-friendly phone compared to other smartphones, even though this particular device has been jampacked with features and applications.

First the hardware: The X7’s amoled touchscreen allows users to view images and other content vividly. Although the X7 may not be the slimmest in its league, it still looks sleek with its dimensions: 119.7 x 62.8 x 11.9 mm. With battery, it weighs 146 grams.

In terms of battery life, the Nokia X7 lasted long enough—more than 24 hours—despite intensive use of features, from browsing the Internet to text messaging and phone calls.

According to the Nokia official data, the battery is rated for up to 450 hours of standby time and 4.5 hours talktime on a 3G network and longer, over GSM.

The Nokia X7 also boasts of an internal memory of 350 MB and pre-installed 8GB microSD card, which can be swapped for a 32 GB memory card. This means that storage for data, music, photos and videos need not be much of a concern for the user.

And now for the software and applications: The futuristic-looking X7 is the first Nokia smartphone to run on renewed and updated Symbian Anna, which allows for faster browsing, improved text input, fresh new icons and the latest version of the Ovi Maps.

Similar to what is being offered by other smartphones, the X7 can also allow users to easily connect to different social networks, such as Twitter, Facebook and chats. And with four rows of widgets installed in the X7, navigating from one app to another can likewise be a breeze.

A setback, however, is that, although browsing may be faster, downloading image-heavy files and websites can still be slow. It has room for further improvement. Also, although the screen provides clear images with 16.7 million colors, using the phone in broad, glaring daylight may be quite a challenge. Another mundane observation is that an easy and simple task, such as inserting a SIM card, has proven to be surprisingly difficult.

In all, the Nokia X7 has again provided smartphone users with another multipurpose gadget to consider, for whatever purpose it may serve—from gaming, video playback and social networking to serious business work. Although quite pricey at P21,000, its usefulness can still offset the dent in one’s pocket.