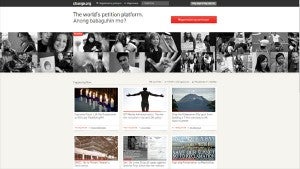 MANILA, Philippines – An alumnus of the University of the Philippines and former reporter of the Philippine Daily Inquirer, who initiated a petition online against a UP Manila policy banning its students from attending classes if they could not pay tuition, welcomed its suspension.

“Due to the pressure we have brought on to the UP administration, this is a partial victory for our petition. We will continue to work for the total revocation of the repressive anti-student and anti-poor policies of UP Manila,” Alcuin Papa said Tuesday.

The petition, which Papa started in the website, www.change.org last Friday, called on administrators of UP Manila to revoke the “no late payment” and “forced leave of absence” policies that were linked to the suicide earlier that day of UP Manila freshman Kristel Tejada.

Tejada took her own life on March 15, two days after she had to file for a leave of absence because she could not pay her tuition for the second semester after scrambling to pay off the loan she took out for her first semester tuition.

University officials denied her request for a loan to cover the second semester, citing a university rule that prevents students from being enrolled when the semester has already begun.

Papa’s petition quickly garnered 5,000 signatures within two days after he started it on Friday afternoon. As of posting time, the petition has garnered 6,349 signatures, which according to change.org administrators made it the biggest and fastest growing education related petition in the website.

During a news conference in UP Diliman on Monday, Papa tried to hand over to UPM Chancellor Manuel Agulto the petition along with the many comments by the signatories. Papa said Agulto and UPM Vice Chancellor for Academic Affairs Josephine De Luna ignored him.

“UP has a long history of providing underprivileged students with a chance of bettering themselves through higher education. Whether the policy is a reason for her suicide or not, policies such as the “no late payment” and “forced leave of absence” are anathema to the UP system’s nature as a “university of the people,” Papa said in his petition.

“Please join me and call on UP Manila to provide better support to students under financial distress and to not bar them from classes if payments are late,” Papa said.

The day before Tejada killed herself, UP President Alfredo Pascual had told the chancellors of all UP campuses that no student should be denied enrollment because of financial constraints.