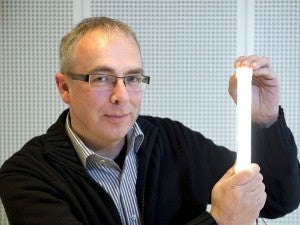 In this photo provided by Philips on Thursday, April 11, 2013, Coen Liedenbaum, a manager at Philips’ research laboratories in Eindhoven, Netherlands, poses for a photo holding a prototype of a new tube LED light developed by the company that is capable of generating 200 lumens of white light per watt. AP

AMSTERDAM— Royal Philips NV is set to unveil a new light Thursday that it claims will replace the fluorescent tube lamps that are common in many offices around the world.

In an interview with The Associated Press ahead of the unveiling of the new lamp Thursday, Rene van Schooten, a top executive at the company, said the lamp will save energy and money as well as cut pollution.

The prototype is headed to mass production and should hit the market in 2015, he said.

The new lamp is an LED light interchangeable with the best fluorescents currently on the market — but taking only half the energy.

“This is a major step forward for the lighting world,” said Van Schooten, CEO of Philips’ light sources division. “It will bring an enormous savings in energy.”

Experts outside the Dutch company have long expected LEDs to eclipse fluorescents. However, if Philips’ bulbs make it to market as advertised, that would be somewhat ahead of expectations.

In recent years, energy-efficient lights made by Philips, Siemens AG, General Electric Co, Cree Inc. and others using LEDs, or light-emitting diodes, have made significant inroads in the home market, replacing many incandescent and halogen bulbs.

But because fluorescent bulbs are highly efficient, LED lights have so far achieved only a small foothold in business and industry. LEDs are competitive in heavy use settings where their longer lifespans and a minor energy edge pay off.

But Philips says its new lamp will change that. The technical milestone the company claims to have achieved is the ability to produce 200 lumens of light per watt of energy.

According to Mark Hand, a technology expert at Philips competitor Acuity Brands Inc., that’s about twice the output per watt of the best fluorescent tubes currently on the market; he estimated the best LED lamps may get up to 120 lumens per watt.

Although Cree already advertises a lamp it says reaches 200 lumens per watt under some circumstances, Van Schooten said the Philips lamp is different.

It will be first on the market that reaches that level of efficiency and functions across a normal range of temperatures and is capable of consistently producing the same amount of warm white colored light as comparable fluorescent tubes.

Essentially, “if you walk into the room, you don’t say, ‘what a funny lamp’,” Van Schooten said.