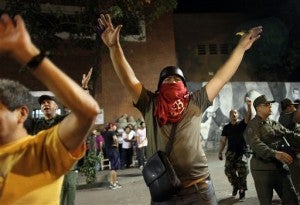 Chavista militants and soldiers try to calm down a group of government supporters as opposition supporters take cover in the background, outside a a polling station that closed after remaining open about 20 minutes past the allotted time, in Caracas, Venezuela, Sunday, April 14, 2013. Although no was waiting to vote, the polling station remained open past 6:00 p.m., until demands by a group of opposition supporters were met for the station to be closed. Voters were deciding Sunday whether to elect interim President Nicolas Maduro, who served as late President Hugo Chavez’s foreign minister and vice president or opposition candidate Henrique Capriles in a special presidential election to replace Chavez who died of cancer on March 5. (AP Photo/Ariana Cubillos)

CARACAS – The Twitter accounts of Venezuela’s acting president Nicolas Maduro and the ruling socialist party were hacked Sunday as the country went to the polls to pick a new president, officials said.

Then messages appeared including “Electoral Fraud by @lulzsecperu and “HACKED BY @LUZLSECPERU,” moments before polls closed in the election for a successor to Hugo Chavez who died of cancer last month, he said.

“This is yet another sign of the enormous desperation” of opposition supporters and their candidate rival candidate Henrique Capriles, Rodriguez said on official VTV television, despite the aparent claim by hacker group LulzSec.

Rodriguez said the hacking was done by the perpetrators of a “dirty campaign from Bogota… which has sought to muddy the electoral process.”

Earlier, Maduro himself said a “dirty war” was being fought from Colombia to try to derail Sunday’s electoral process.

Maduro specifically accused Venezuelan political adviser Juan Jose Rendon, who works with the Capriles campaign, of being behind what Maduro called a “dirty war to poison the electoral process and sow hatred in the country.”