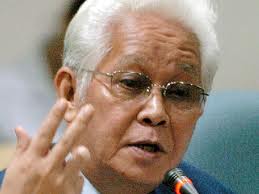 Brillantes claimed that Lagman has been misleading the public through media interviews by saying that “the absence of the source code will affect the elections.”

“I think he is trying to mislead everybody and trying to create a scenario where there is a problem because of the source code,” Brillantes said.

“He keeps on repeating that the absence of the source code will affect the elections, that’s wrong, totally wrong,” he said. “I challenge mister Lagman to debate with me on the source code, [after all] I am less of an IT expert.”

The source code is the computer software program that gives instructions to the PCOS machine regarding the counting, canvassing, and transmission of the votes.

The PCOS machines as well as its source code is owned by Dominion Voting Systems Inc., which has gone into a legal dispute with Smartmatic, the company the Comelec contracted to conduct the automated elections.

The source code has since been withheld pending the resolution of the case in the United States. Brillantes has been negotiating for several weeks with both sides to get the source code and make it available for review by the local political parties and interested groups.

Brillantes however recently said that he has fully given up on getting it before the May 2013 elections begin after negotiations have bogged down anew. He maintained that it will not affect the “legitimacy and validity” of the elections.

“The only effect of not having the source code is there [are] some doubts as to the credibility because the political parties and other interest groups will not be able to examine or review [it],” Brillantes said.

“That is not for purposes of legitimacy and validity of elections,” he said.

Lagman was misleading the public by saying only that there is no source code and not mentioning the fact that an independent certifier had already reviewed it and issued a certificate for it.

“He should not be talking too much on TV or on radio because he does not understand all the facts,” Brillantes said.

“He is an IT expert, he should know that the source code has already been reviewed and certified to by an independent certifier,” he said.

Brillantes said that the independent certificate was a requirement under the law, but the review by political parties was not a requirement.

He reiterated that in the 2010 automated elections, a review of the source code was not conducted by political parties or interested groups and it had not affected the results of the elections.

PAL to ax some long-haul flights to slow bleeding