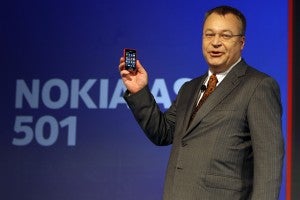 Nokia Chief Executive Officer Stephen Elop displays a Nokia Asha 501 smartphone during its launch in New Delhi, India, Thursday, May 9, 2013. Nokia unveiled the first of a new family of Asha smartphones with the Nokia Asha 501 priced at US$99. AP PHOTO/ALTAF QADRI

NEW DELHI—Struggling Finnish handset giant Nokia unveiled on Thursday its next generation of lower-end mobile smartphones as it seeks to gain traction in a market expected to be worth $40 billion by 2015.

India, the world’s second-largest mobile market after China, “is very important” for Nokia, Elop told reporters, fresh from a bruising meeting in Helsinki earlier this week with shareholders unhappy at Nokia’s poor earnings.

The country of 1.2 billion people, Nokia’s second-biggest market in 2012, is a “bellwether market that is a very leading indicator of some trends”, he said.

The Asha 501 borrows some of its looks from Nokia’s higher specification Windows-based Lumia phone and is aimed at stopping consumers embracing Google’s Android software offered on cheaper handsets made typically in China.

Elop, who took the reins of Nokia three years ago and is facing demands from shareholders to review his controversial move to switch to Microsoft’s Windows software, declined to comment directly on Nokia’s financial performance.

Nokia, which reported a $355 million first-quarter net loss, is struggling to recover ground in the smartphone line after its number of smartphones sold worldwide fell by 49 percent in the first quarter.

Analysts say the future of the former global leader may lie in selling budget smartphones in emerging markets such as India and Africa where penetration is still relatively low.

But the Finnish company faces stiff competition from Apple and Samsung as well as from Chinese and Taiwanese handset makers.

It is seeking to ramp up its smartphone portfolio in the sub-$100 smartphone market which the company estimates will be worth $40 billion globally by 2015.

The Asha 501—Asha means “hope” in Hindi—claims to offer 17 hours of talk time and 48 days of standby time. Nokia will start shipping the device to vendors worldwide in June and the phone will be available in 90 countries.

The Asha 501 will initially be a 2G phone “as 80 percent of the world operates in 2G environment,” said Elop, but Nokia will widen the range to include 3G phones as well.