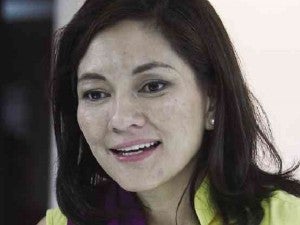 MANILA, Philippines—On the verge of her second defeat in elections, administration candidate Risa Hontiveros has taken to Twitter to show there’s more to life than making it to the Senate.

“The kids off to class, the morning newspaper, cool air, the voice of birds, mild sun, lowered expectations, always hope,” said Hontiveros, a single mother, on her Twitter account a day after the elections on Monday.

Just as the pre-election surveys indicated, the parallel count of the Parish Pastoral Council for Responsible Voting immediately had Hontiveros well out of the winning circle of top 12 candidates.

As of 12 noon on Thursday, the PPCRV count had Hontiveros at 17th place with more than 8.875 million votes.

“Errands this morning. Picking up neglected duties of everyday life. Passed by HQ but the national canvass is on hold. Suspended animation,” Hontiveros tweeted on Wednesday.

The slow pace the national canvass by the Commission on Elections also seems to have affected Hontiveros and her bid, not for a win, but for closure.

“Count has crawled since afternoon. Will watch fast-paced Iron Man with kids. Life is uneven; we wait for closure, we wait for duration. Go with glow,” Hontiveros said in yet another tweet.

Hontiveros on Tuesday thanked her supporters and expressed hope that her campaign somehow changed the way people vote so that “ordinary folk” like her would have a chance to win.

From her tweets, Hontiveros seems to be getting encouragement from common people despite her present standing in the senatorial race.

She also had celebratory tweets, those congratulating Jesse Robredo’s widow Leni, who won the congressional seat representing the second district of Camarines Sur.

Hontiveros and former senators Ramon Magsaysay, Jr. and Jamby Madrigal are the three of President Benigno Aquino’s handpicked candidates who  appear to be on the way to defeat in the recent senatorial elections.

A two-term congresswoman representing the party list Akbayan, Hontiveros first ran for a Senate seat as part of then Senator Aquino’s senatorial ticket in 2010.

While Aquino went on to win the presidency, Hontiveros missed a chance to serve in the Senate after she placed 13th in the 2010 elections.

TOPICS: election highlights, Elections 2013, politics, Risa Hontiveros, Twitter
Read Next
Smartmatic lets PPCRV examine audit logs
EDITORS' PICK
Garcia softens stance, meets IATF halfway on swab-upon-arrival policy
Want to help local farmers? Shop small and eat Real Food
ICC is everything but a court of ‘white people’
Manila is 78th most expensive city in the world for foreign workers
TeaM Energy pushes development programs to help in pandemic rebound
Piolo Pascual: The Ultimate Heartthrob continues to level up
MOST READ
Sharon Cuneta on living in the US: ‘Nagagawa ko lahat ng normal na bagay’
ICC is everything but a court of ‘white people’
Duterte-Duterte tandem possible but ‘winnability is another question’ — Binay
Mike Nieto asks fans: ‘No below the belt remarks’ toward South Korea
Don't miss out on the latest news and information.