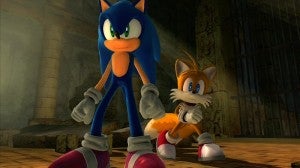 This undated publicity image released by courtesy of game publisher Sega, shows Sonic, left, and sidekick, Tails, in the 2006 video game “Sonic the Hedgehog,” for the Xbox 360 and PlayStation 3. Sega says it will exclusively release the next three games starring the iconic blue critter on Nintendo platforms. AP photo

LOS ANGELES— Sonic the Hedgehog is rolling with Nintendo.

Sega says it will exclusively release the next three games starring the popular blue critter on Nintendo platforms. The first title will be called “Sonic Lost World” and is set for release on the Wii U and Nintendo 3DS later this year.

“With ‘Sonic Lost World,’ we’re going to introduce new gameplay and enemies, which is always fun,” said John Cheng, president and chief operating officer of Sega of America Inc. “In terms of Sonic and his friends, he’ll have his same friends there, and I think there’ll be some new ones as well. It’s not a reiteration. It’s going to be all new.”

The original fast-paced side-scrolling “Sonic the Hedgehog” debuted in 1991. The twirling, ring-hoarding hedgehog became Sega’s mascot and a video-game icon rivaling the likes of Mario and Pac-Man.

While his recent interactive exploits haven’t achieved the same level of success as previous “Sonic” outings, the character has remained a presence in pop culture, appearing in cartoons, downloadable games and the Disney film “Wreck-It Ralph.”

“The onetime rivalry between Mario and Sonic has grown into a friendship that has never been closer,” said Nintendo of America President Reggie Fils-Aime in a statement. “These announcements in conjunction with Sega demonstrate the commitment we have to bringing great games to the Wii U platform, and set the stage for our upcoming announcements at E3.”

Over the past 22 years, Sonic and his friends have starred in dozens of games, including the hallmark 1992 sequel “Sonic the Hedgehog 2,” 1997 3-D racer “Sonic R,” 2002 hand-held adventure “Sonic Advance” and 2011 anniversary mash-up “Sonic Generations.”

Sega says more than 75 million games and smartphone apps featuring Sonic have been sold worldwide. After the publisher stopped producing its own game consoles in 2001, Sega began releasing “Sonic” games for other systems, including Sony Corp.’s PlayStation and Microsoft Corp.’s Xbox.

Microsoft is expected to unveil a new Xbox console at an event in Seattle next week, following Sony’s tease of the forthcoming PlayStation 4 earlier this year in New York.

Last fall, Nintendo launched the next generation of gaming consoles with the Wii U, which comes with a tabletlike controller called the GamePad. Nintendo said last March it has sold 3.45 million units worldwide, a disappointing start for the first of a new generation of gaming systems. Sega’s Cheng believes bringing Sonic exclusively to the Wii U will help Nintendo.

“It should be a win-win situation,” said Cheng. “Don’t count Nintendo out.”