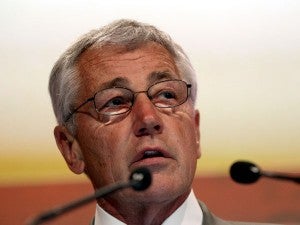 SINGAPORE—US Defense Secretary Chuck Hagel on Saturday accused China of waging cyber espionage against the United States, raising pressure on Beijing over the issue ahead of a key summit between their leaders.

“The United States has expressed our concerns about the growing threat of cyber intrusions, some of which appear to be tied to the Chinese government and military,” he told an annual conference known as the Shangri-La Dialogue.

Hagel pressed Beijing to adhere to “international norms of responsible behavior in cyberspace,” while acknowledging that the establishment of a joint cyber security working group was a positive step in fostering dialogue.

The Singapore forum came ahead of the June 7-8 meeting between US President Barack Obama and his Chinese counterpart Xi Jinping in California, the two leaders’ first meeting since Xi took office in March.

China’s delegation to the Singapore meeting was led by Lieutenant General Qi Jianguo, a deputy chief of the general staff of the People’s Liberation Army.

The report was the most explicit statement yet from Washington that it believes China’s cyber spying is focused on the US government and corporations.

In his speech, Hagel insisted that Washington’s military “rebalance” towards Asia-Pacific — a policy announced at the same forum last year by his predecessor Leon Panetta — will not be affected by cuts in US military spending.

He said the US Air Force had allocated 60 percent of its overseas-based forces to the region including tactical aircraft and bombers.

Hagel added that 2,500 US Marines will eventually be deployed to Australia each year as part of the effort.

Last year, Washington announced a major naval deployment to Asia, including the rotation of up to four Littoral Combat Ships — newly developed vessels designed for coastal operations — to Singapore, a staunch US supporter.

Hagel said Washington remained concerned “over the potential for dangerous miscalculations or crises” arising from competing territorial claims in Asia.

“The United States stands firmly against any coercive attempts to alter the status quo,” he said, urging claimant nations to settle disputes peacefully and in a manner that adheres to international law.

Hagel announced that he was inviting his counterparts from the 10-member Association of Southeast Asian Nations (Asean) to a meeting in Hawaii next year, which would be the first such meeting hosted by the United States.

Four of Asean’s 10 member states — Brunei, Malaysia, the Philippines and Vietnam — are locked in territorial disputes with China.

But smaller Asean member countries like Laos and Cambodia appear to have come under increasing Chinese economic and political influence, partly as a result of foreign aid from Beijing.

Hagel also used the Singapore conference to reaffirm Washington’s defense treaty with its former colony the Philippines, which has been the most vocal opponent of Chinese territorial ambitions in the West Philippine Sea (South China Sea).

The Philippines and the United States, whose soldiers fought side by side in the Pacific theater during World War II, are bound to help defend each other in case of external attacks under a mutual defense treaty signed in 1951.

TOPICS: China, Cyber Espionage, Cyberspace, Defense, hacking, intelligence, Military, Territorial dispute, US, West Philippine Sea
Read Next
Hagel warns China on cyberattacks
EDITORS' PICK
Mandaluyong fire put under control hours after it started
Leveling up your ‘lutong bahay’ with the kitchen companion you never knew you needed
Bato de la Rosa, Risa Hontiveros back bill increasing female recruitment quota in PNP
Quarantine violations still punishable despite deleted provisions in ‘Bayanihan 2’ – Bato dela Rosa
Someone from the Philippines can become $356 Million richer this Tuesday
Cherry Mobile teams up with Cloud Panda PH, launches online store
MOST READ
‘If I had not been SolGen, I will make you eat your words,’ Calida tells Coco Martin
5 car dealership outlets shutting down
51 percent of German firms holding back investments in PH, but not because of COVID-19
Senate OKs bill authorizing president to postpone opening of classes beyond August
Don't miss out on the latest news and information.