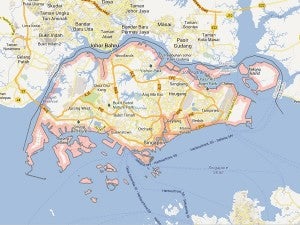 SINGAPORE—Over 130 Singaporean bloggers blacked out their homepages Thursday to protest new licensing rules for news websites they say will muzzle freedom of expression.

The 134 participants, including individual bloggers and community-based blogs, replaced their homepages with black screens featuring the words “#FreeMyInternet”, as well as the time and venue of a rally to be held Saturday. The 24-hour blackout was to last until midnight.

The protest comes after surprise regulations came into force on June 1 requiring news websites — including one operated by US-based Yahoo! — to obtain licenses from the city-state’s official media regulator.

“This is not just a movement by socio-political blogs. The participating websites are from all genres from lifestyle and food, to technology,” said Choo Zheng Xi, a spokesman for the “Free My Internet” group that organized the protest.

“The diversity reflects an awareness that the new regulations can affect anyone because it has been framed so widely,” added Choo, the co-founder of popular political website The Online Citizen.

A rally will be held Saturday at a designated free-speech area, where police permits are not required.

Singapore’s media regulator, the Media Development Authority (MDA), and government leaders have sought to allay fears over the past week that the new rules were aimed at the feisty blogging community, pointing out that blogs were not considered news portals.

Minister for Communications and Information Yaacob Ibrahim on Tuesday dismissed claims by bloggers that the new rules would impinge on Internet freedom.

“I think the best way for people to see, after the licenses are issued, is whether the activists are indeed limited in their public discourse,” he told the local media.

“I hope that the activists who are today making this far-fetched claim will be honest enough to admit it when the time comes.”

Bloggers participating in the Internet blackout insisted that the broad power of the new rules were indicative of the government’s intentions to require blogs to seek licensing in the future as well.

The new rules stipulate that websites which have at least 50,000 unique visitors from Singapore every month and publish at least one local news article per week over a period of two months must obtain an annual license.

“Although the government would say that my fears are ‘far-fetched’ and that I am over-reacting, I’m not happy to ‘wait and see’,” Kirsten Han, a socio-political blogger, told Agence France-Presse.

“I don’t want to leave it up to trust that they won’t make use of the catch-all definitions to extend the licensing regime to other websites and blogs in the future,” she said.