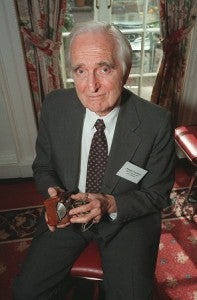 In this April 9, 1997 file photo, Doug Engelbart, inventor of the computer mouse and winner of the half-million dollar 1997 Lemelson-MIT prize, poses with the computer mouse he designed, in New York. Engelbart has died at the age of 88. The cause of death wasn’t immediately known. AP/Michael Schmelling

LOS ANGELES—Douglas Engelbart, who revolutionized computing by inventing the mouse, died in California on Tuesday at the age of 88, the institute bearing his name said Wednesday.

Born in Oregon, Engelbart studied electrical engineering and computer sciences in the 1950s before joining the Stanford Research Institute.

There, he and his team worked on a number of concepts that have entered the computer mainstream, such as email, video conferencing, hypertext links and ARPAnet, the precursor of the Internet.

But he is best remembered for the mouse, which in its original incarnation was a wood box with two metal wheels and was granted a patent in 1970.

He had publicly used it two years earlier during a video conference in San Francisco before some 1,000 people — an event that became known as “the mother of all demos.”

Engelbart had a total of 21 patents to his name. In 2000 he was presented with the National Medal of Technology, the tech industry’s highest honor.