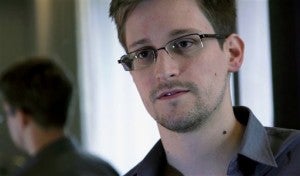 CARACAS, Venezuela—The quest by NSA leaker Edward Snowden for a safe haven has taken a turn toward Latin America, with offers for asylum coming from the leftist presidents of Nicaragua and Venezuela.

But there were no immediate signs that efforts were under way to bring him to either nation after Nicolas Maduro of Venezuela and Daniel Ortega of Nicaragua made their offers during separate speeches in their home countries Friday.

The offers came one day after leftist South American leaders gathered to denounce the rerouting of Bolivian President Evo Morales’ plane over Europe amid reports that the fugitive American was aboard.

Snowden, who is being sought by the United States, has asked for asylum in more than 20 countries, including Nicaragua and Venezuela. Many another nations have turned him down.

“As head of state, the government of the Bolivarian Republic of Venezuela decided to offer humanitarian asylum to the young American Edward Snowden so that he can live in the homeland” of independence leader Simon Bolivar and the late President Hugo Chavez without “persecution from the empire,” Maduro said, referring to the United States.

Maduro said several other Latin American governments have also expressed their intention of taking a similar stance by offering asylum for the cause of “dignity.”

Chavez, who hand-picked Maduro as his successor, often engaged in similar defiance, criticizing US-style capitalism and policies. In a 2006 speech to the UN General Assembly of world leaders, Chavez called President George W. Bush the devil, saying the podium reeked of sulphur after the US president’s address. He also accused Washington of plotting against him, expelled several diplomats and drug-enforcement agents and threatened to stop sending oil to the US.

Maduro made the asylum offer during a speech marking the anniversary of Venezuela’s independence. It was not immediately clear if there were any conditions to Venezuela’s offer.

But his critics said Maduro’s decision is nothing but an attempt to veil the current undignified conditions of Venezuela, including one of the world’s highest inflation rates and a shortage of basic products such as toilet paper.

“The asylum doesn’t fix the economic disaster, the record inflation, an upcoming devaluation (of the currency), and the rising crime rate,” Venezuelan opposition leader Henrique Capriles said in his Twitter account. Maduro beat Capriles in April’s presidential election, but Capriles has not recognized defeat and has called it an electoral fraud.

Asked earlier this week about the possibility that any countries in the region would offer Snowden asylum, Geoff Thale, program director at the Washington Office on Latin America think tank, said that he thought Ortega would be careful not to damage his country’s relationship with the US.

“Ortega has been tremendously successful at exploiting both the ALBA relationship and the US relationship,” Thale said, referring to the ALBA leftist trade bloc that provides Nicaragua with petroleum subsidies. Although Ortega is publicly seen as anti-American, “Nicaragua and the US cooperate very closely on drug interdiction and the US and Nicaraguan militaries work very closely, too,” Thale said before the asylum offer was made.

Ortega said Friday he was willing to make the same asylum offer “if circumstances allow it,” although he didn’t say what those circumstances would be when he spoke during a speech in Managua.

He said the Nicaraguan embassy in Moscow received Snowden’s application for asylum and that it is studying the request.

“We have the sovereign right to help a person who felt remorse after finding out how the United States was using technology to spy on the whole world, and especially its European allies,” Ortega said.

The offers came one day after Maduro joined other leftist South American presidents Thursday in Cochabamba, Bolivia, to rally behind Morales and denounce the incident involving the plane.

Spain on Friday said it had been warned along with other European countries that Snowden, a former US intelligence worker, was aboard the Bolivian presidential plane, an acknowledgement that the manhunt for the fugitive leaker had something to do with the plane’s unexpected diversion to Austria.

It is unclear whether the United States warned Madrid about the Bolivian president’s plane. US officials will not detail their conversations with European countries, except to say that they have stated the US’s general position that it wants Snowden back.

Maduro joined other leftist South American presidents Thursday in Cochabamba, Bolivia, to rally behind Morales and denounce the rerouting incident.

President Barack Obama has publicly displayed a relaxed attitude toward Snowden’s movements, saying last month that he wouldn’t be “scrambling jets to get a 29-year-old hacker.”

But the drama surrounding the flight of Morales, whose plane was abruptly rerouted to Vienna after apparently being denied permission to fly over France, suggests that pressure is being applied behind the scenes.

Spanish Foreign Minister Jose Manuel Garcia-Margallo told Spanish National Television that “they told us that the information was clear, that he was inside.”

He did not identify who “they” were and declined to say whether he had been in contact with the US. But he said that European countries’ decisions were based on the tip. France has since sent a letter of apology to the Bolivian government.

Meanwhile, secret-spilling website WikiLeaks said that Snowden, who is still believed to be stuck in a Moscow airport’s transit area, had put in asylum applications to six new countries.

Wikileaks said in a message posted to Twitter on Friday that it wouldn’t be identifying the countries involved “due to attempted US interference.”

Icelandic lawmakers introduced a proposal in Parliament on Thursday to grant immediate citizenship to Snowden, but the idea received minimal support.