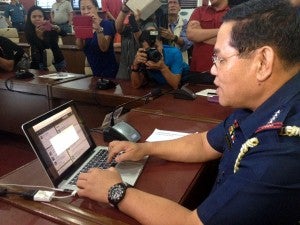 @AlanLPurisima, the PNP chief’s personal Twitter account, was launched Friday by the country’s top cop himself, even as he struggles to type and look for the @ symbol.

It’s his first foray into social media and he’s not embarrassed to admit it.

“Ah Facebook! I had an account but that was fake,” he said laughing. The PNP had immediately taken it down.

Reporters and photojournalists gathered around Purisima while his top lieutenants taught him the basics of tweeting on his laptop. “I am willing to learn this,” he said.

One was overheard telling him that to find Twitter on the Internet, he must look for the blue bird (“Iyong blue na ibon, Sir”) on the screen. Another pointed out where the @ sign was.

Purisima smiled throughout the quick tutorial, seemingly amazed at the wonders of technology. After he sent his second tweet, he glanced at reporters, looking relieved.

As of 5:13 p.m., Purisima already had 248 followers. One had already sent a complaint to him about the vehicles in front of the Bacoor Police Station, which Purisima promptly acknowledged with mention of his course of action.

Initially, Purisima’s account was locked, even if it was announced that it would be open to all those who wanted to follow him. After reporters pointed this out, his account was made public.

At a press conference, Purisima said that he wanted  the PNP to maximize the use of technology to improve the police’s service to the public by getting immediate feedback from them.

“We want to improve our services. As the chief PNP, I also want to know on a personal and official note what the people’s sentiments are. Twitter can help me in the performance of our duty,” he said in Filipino.

“We can talk here on a personal note,” Purisima told reporters. I want to hear the feedback of our community.”

Purisima said that he would encourage all the PNP’s commanders to have their own Twitter accounts.

“Those who cannot go to the office and express their opinions can do so in the Twitter accounts. We should use technology to say what we want to say to our police, especially our commanders,” Purisima said.

Purisima earlier said the idea of the police going online was prompted by a report showing a significant number of crime victims do not report to police due to several reasons, including the inaccessibility of police stations.

He said information and figures that could be derived from these reports could help PNP to come up with an effective deployment strategy.

“This also manifests the responsiveness of the PNP to the ever growing need for socially relevant information on matters of public interest,” the PNP chief said.

Social media monitor Semicast estimated in 2012 that there were some 9.5 million Filipino using Twitter.