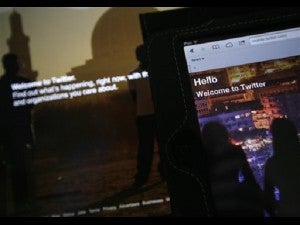 In this Wednesday, July 31, 2013 photo-illustration, the home page for Twitter is displayed on an iPad and a laptop computer. If Twitter is the chirping chatterbox of the Internet, trolls are its dark underground denizens. The collision of the two is driving a debate in Britain about the scale of hatred and the limits of free speech online.The furor erupted this week after several women went public about the sexually explicit and often luridly violent abuse they receive on Twitter from trolls _ online bullies and provocateurs who send abusive or disruptive messages, often for their own amusement. Many regard trolls as an annoyance to be ignored, but there are growing calls for action when their abuse crosses over into threats. (AP Photo/Alastair Grant)

LONDON — If Twitter is the chirping chatterbox of the Internet, trolls are its dark underground denizens.

The collision of the two is driving a debate in Britain about the scale of online hatred and the limits of Internet free speech.

The furor erupted this week after several women went public about the sexually explicit and often luridly violent abuse they receive on Twitter from trolls — online bullies and provocateurs who send abusive or disruptive messages, often for their own amusement.

Many regard trolls as an annoyance to be ignored, but there are growing calls for action when their abuse crosses over into threats.

Police are investigating a threat of rape and murder made to Labour Party lawmaker Stella Creasy by a user with the Twitter name @killcreasynow. The crude and graphically violent tweet was one of many Creasy received after she tweeted in support of feminist campaigner Caroline Criado-Perez. Criado-Perez was sent a torrent of invective after she campaigned, successfully, for novelist Jane Austen to appear on a British banknote.

Two men have been arrested in connection with the Twitter threats, but have not been charged.

Such abuse is neither new nor confined to Britain. American writer Lindy West wrote earlier this year about receiving a slew of sexual threats after she appeared on a TV debate about rape jokes.

But the subject has received an unprecedented level of public exposure this week, sparking debates on British radio and television news programs and articles in national newspapers — even the tabloids. Creasy and Criado-Perez are among a growing group who have decided to face down the abusers, retweeting their messages in an attempt to “name and shame” the offenders, and reporting the most threatening messages to police.

Hardaker said that while the stereotypical image of a troll is of a man in his late teens or early 20s, they are a surprisingly disparate group — 30-something women and men in their 60s have been caught trolling.

The motivation ranges from revenge to entertainment to boredom. While it seems a solitary activity, there is an online community of trolls who use sites like the anarchic forum 4Chan used to swap congratulations and criticism and egg one another on.

And while the technology is new, the impulses are as old as time.

“We have long been entertained by watching violence happen to other people,” Hardaker said. “It isn’t that the Internet has turned us into monsters. It has produced this online Colosseum where we can go and throw people to the lions ourselves.”

The relative anonymity of the Internet makes online abuse hard to stop. Many trolls change online identities frequently and use software that masks their ISP address, making them hard to track down. Police are sometimes reluctant to spend major resources on what can be seen as minor online crime.

British campaigners are calling for Twitter to do more to block bad behavior. The site’s rules explicitly bar threats of violence, but users currently have to fill out an online form to report abuse, a process some say is time-consuming and unwieldy. An online petition calling for the social networking site to establish a single “report abuse” button has more than 100,000 signatures.

Lawmaker John Whittingdale, the head of Parliament’s Culture, Media and Sport Committee, said the group was planning to summon Twitter bosses to appear before it in the fall, “to determine whether they are doing as much as they can or whether they should do more.”

Twitter insists it takes the issue seriously and is planning to expand an abuse-reporting button, already available on its iPhone app, to other platforms.

“We absolutely do work with law enforcement on issues like these,” Del Harvey, Twitter’s senior director of trust and safety, told the BBC’s “Newsnight” program. “These sorts of threats are against the rules. We suspend accounts when they’re reported to us. We’re working to make it easier to report those accounts. We think this is really important.”

Some say Twitter can’t, and shouldn’t, police the Internet. While the U.S. Supreme Court has ruled that First Amendment protections of freedom of speech apply to the Internet, restrictions on online expression in other Western democracies vary widely.

In Germany, where it is an offense to deny the Holocaust, a neo-Nazi group has had its Twitter account blocked. In Britain, hundreds of people are charged each year for sending menacing, indecent, offensive or obscene messages. People have been convicted for making offensive comments about a murdered child and for posting on Facebook that soldiers “should die and go to hell.”

Some civil libertarians are wary of criminalizing even more online activity.

They argue that most online talk is just that — talk, never intended to translate into action. GQ magazine recently reprinted some of the blood-curdling threats it received from One Direction fans after running a cover story on the boy band that some fans found insufficiently reverential. Many of the comments were obscene, intemperate and violent — but few people suggest the tweeters should be prosecuted.

Padraig Reidy of civil liberties group Index on Censorship cautioned that the “report abuse” button was no quick fix — it could itself be abused by governments to silence their opponents or by celebrities to muzzle their critics.

“We often think that just because things are happening online there is a technical solution to make the Web a better place,” Reidy said. “But it’s going to take real engagement.”

Anti-trolling campaigners have already taken matters into their own hands — retweeting abuse in order to expose the problem to the light.

A group of women in Britain has coined the #everydaysexism hashtag to chronicle the extent of misogyny many women still face. Last month it was used to draw attention to dozens of tweets calling Wimbledon women’s tennis champion Marion Bartoli “fat,” ”ugly,” a “slut” and even more offensive terms.

Sometimes such “naming and shaming” can be remarkably effective.

This week a Twitter troll sent an abusive and sexually explicit tweet to Mary Beard, a Cambridge University classicist and television presenter. Beard retweeted it to her 43,000 followers, and soon a second Twitter user was offering to supply the mailing address of the offender’s mother so she could see what her son had written.

He quickly became contrite. “I was wrong and very rude,” he wrote. “Hope this can be forgotten and forgiven.”